Racist Alison Roman Thinks Only White Women Should Succeed in the Lifestyle Business. Hello Famewatchers, say hi to our Racist of the Day! Her name is Alison Roman. She is apparently kinda famous for copying ethnic recipes, repurposing them for white Karens, then making money by publishing said recipes on the New York Times.

Why is she racist, is stealing recipes racist? Nah, not really. Stealing recipes is stealing so Alison Roman is a recipe thief. Now, she is racist because she is shitting on women of color — particularly Christy Teigen and Marie Kondo — for using their personal brand to succeed in business. The thing is, hundreds of white Karen ladies have been using their personal brand to make money — from Gwyneth Paltrow, to the Kardashian sisters, to Martha Stewart, to the countless Karens selling stuff on QVC or HSN or Instagram — and yet Alison Roman is giving these white ladies a pass.

If that ain’t racism, we don’t know what is. 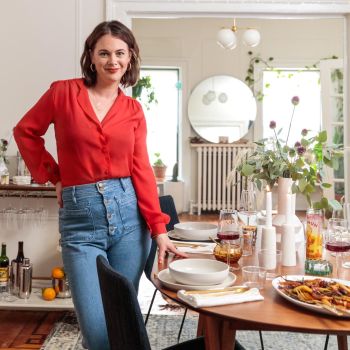 Here’s what Alison disdainfully says about Teigen: “Like, what Chrissy Teigen has done is so crazy to me. She had a successful cookbook. And then it was like: Boom, line at Target. Boom, now she has an Instagram page that has over a million followers where it’s just, like, people running a content farm for her. That horrifies me and it’s not something that I ever want to do. I don’t aspire to that. But like, who’s laughing now? Because she’s making a ton of fucking money.”

And here’s what Alison and her supercilious eyebrows are saying about Kondo: “Like the idea that when Marie Kondo decided to capitalize on her fame and make stuff that you can buy, that is completely antithetical to everything she’s ever taught you… I’m like, damn, bitch, you fucking just sold out immediately! Someone’s like ‘you should make stuff,’ and she’s like, ‘okay, slap my name on it, I don’t give a shit!”

As we were saying, lots of white girls have been doing what Teigen and Kondo have also somehow succeeded to do but why ain’t Alison branding them as sell-outs? Why is she not horrified by Gwyneth? Why does she not judge Martha for capitalizing on her fame to sell stuff? Why are the Kardashian girls still famous? Okay, to be fair, Alison has nothing to do with that last one.

Anyways, there’s only one reason why Alison is excusing the white ladies while condemning the women of color who are essentially doing the same thing: She is a racist ho. Which is why we are naming her as our Famewatcher Racist of the Day.

Nota Bene II: We want to clarify, we are not coming for Alison Roman, especially not her. We are trying to clarify that our business model is not to call people racist, which work well for some, but don’t see it working for us.

Nota Bene III: Just wishing we had someone to hug us while facing our first internet backlash from white Karens.

Racist Alison Roman Thinks Only White Women Should Succeed in the Lifestyle Business. Last updated: May 9, 2020 at 13:44 pm.