For those of you who want to know more about Piers’ girlfriend: Her name is Celia Walden and she is a writer. 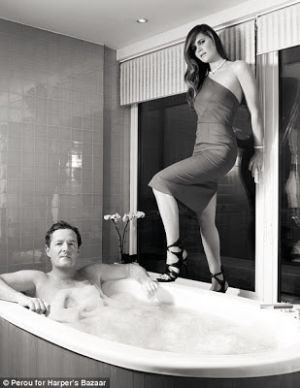 Hmmm. Are we the only ones who are kinda thinking that Piers Morgan girlfriend may be too good for him? Hehe. Seriously, she looks beautiful while Piers is, to borrow Joey Tribbiani’s words, “non-pretty”.

Now, if you are less interested in Piers Morgan girlfriend and would rather read about other stories about him then check out our other posts below. Otherwise, go find out how you can smell like a celebrity with these best mens perfumes.

Piers Morgan on David Beckham: He’s Banned on My Show!
First, we must admit that we like Piers Morgan. We were cheering for him when he was battling Omarosa on The Apprentice and we were thrilled when he emerged as the winner of that show.

Having said that, we don’t like the fact that Piers is using David Beckham to generate buzz for his show. It’s okay if Piers dislikes Beckham, it’s okay if he doesn’t invite Becks to his show, it’s okay to ban Beckham outright BUT Piers is being a douchebag for broadcasting to the world that he banned the football star from appearing on his show.

Wazzup Piers? If you don’t like the guy then don’t go about yapping about him. Seems like you’re just creating controversy to attract public — and David’s — attention. How Omarosa is that?

Piers Morgan: Simon Cowell and Madonna Are Da Best
Who’s the ideal woman for Simon Cowell? If Piers Morgan would have his way, he’d have Simon shacking up with Madonna. Says Piers, according to The Sun, on a Madonna-Simon pairing: “They’re both fabulously rich — and have massive egos.”

Do you agree with Piers? We must admit that the idea of the two coming together as a couple kinda scares us. That would be giving way too much power in the hands of just one couple. What if they decide to annihilate all of us? How can we resist their tyranny? Hehe.

Hey Piers, we love you in Celebrity Apprentice but we don’t like you for suggesting this thingie. Are you trying to invite the Apocalypse?

Piers Morgan vs. David Haselhoff
Let’s hope the America’s Got Talent producers will show the video of this reported dog fight between Piers and David. What is the fight about?

From a Daily Mail source: ‘It all flared up over a husband-and-wife magic act. The couple had lost all their money in the recession and this was their last chance. Hasselhoff voted no and the audience went crazy booing him.

‘Then Sharon Osbourne voted yes and so it all came down to Piers’s vote. He voted to send them through to the next round, the crowd went crazy, the couple’s kids came on in tears – and then Hasselhoff went nuts.”

Adds the source on David’s behavior: ‘He started yelling abuse at Piers, and Piers was giving back as good as he was getting, when suddenly David stood up, walked around the judges’ table and got right in Piers’s face. Then he threatened to headbutt him. He said it loudly and clearly and everyone heard him. David was out of control, shouting and swearing. It was a full-on verbal assault. He was hurling all sorts of abuse at Piers, who looked genuinely upset and was momentarily shocked into silence. He was shaking his head and just staring daggers at David.”

So there, now you know about Piers’ “adventures” with David. If this source’s description of the incident is 100% accurate then we think David is being ridiculous. What does he think, that Piers has no mind of his own and must follow David’s judgment? Maybe David, the Paula Abdul of America’s Got Talent, was shocked that he was getting booed (usually Piers is object of the crowd’s boos) so he decided to pick a fight with Piers? How silly.