Bad Negative Effects of Video Computer Games to Kids… But There Are Some Good Effects Too. Wondering about what over-use of video games will do to you or your children? Hah. See what it did to a German kid in the funny video above (our friend Deena describes the video as unfunny rather than funny). Thankfully, the video is captioned in English so you will understand what the kid is going through. 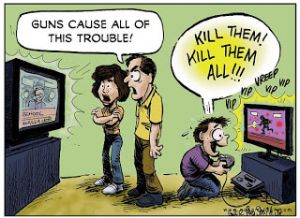 Anyways, for those of you looking for research studies on the bad negative effects of video computer games, here’s what we found on the internet:

1. If you spend a lot of your time playing video games, you will get fat. Aha, you know that already. But this is what a researcher says:
Content aside, the amount of time kids spend playing games, even the good ones, is contributing to the obesity epidemic among American youth. For too many kids, the only parts of their body they are exercising are their thumbs. We are particularly concerned, therefore, about the launch of games this year aimed at children as young as two. We know that the industry wants to expand its customer base and that it is in their economic interest to hook babies on games. This trend, however, raises serious implications for our children’s health. [source]

So do you agree with the above bad negative effects of video computer games?

Earlier, we told you that of the bad negative effects of video computer games. Specifically, that video games can drive you batshit crazy so you should not overdo your video-game playing. However, researchers are now saying that playing video games have beneficial effects too. Really?

Yes, according to researchers from the University of Rochester in New York, action video games help adults improve their “ability to notice subtle differences in shades of gray”.

Here’s a report from Reuters: “Adults who play a lot of action video games may be improving their eyesight, U.S. researchers said on Sunday. They said people who used a video-game training program saw significant improvements in their ability to notice subtle differences in shades of gray, a finding that may help people who have trouble with night driving. ‘Normally, improving contrast sensitivity means getting glasses or eye surgery — somehow changing the optics of the eye,’ said Daphne Bavelier of the University of Rochester in New York, whose study appears in the journal Nature Neuroscience. ‘But we’ve found that action video games train the brain to process the existing visual information more efficiently, and the improvements last for months after game play stopped.'”

But how exactly did they come up with this finding? Here’s how they did it.

For the study, the team divided 22 students into two groups. One group played the action games “Call of Duty 2” by Activision Blizzard Inc and Epic Games’ “Unreal Tournament 2004.” A second played Electronic Arts Inc’s “The Sims 2,” a game they said does not require as much hand-eye coordination.

The two groups played 50 hours of their assigned games over the course of nine weeks. At the end of the training, the action game players showed an average of 43 percent improvement in their ability to discern close shades of gray, while the Sims players showed none. Bavelier found very practiced action gamers became 58 percent better at perceiving fine differences in contrast.

“When people play action games, they’re changing the brain’s pathway responsible for visual processing. These games push the human visual system to the limits and the brain adapts to it,” Bavelier said in a statement. She said the findings show that action video-game training may be a useful complement to eye-correction techniques.

Okay. We’re not really sure if this is a conclusive finding considering that there were only 22 people involved. Also, please note that only action video games and not every video game can help improve your eyesight.

Bad Negative Effects of Video Computer Games to Kids… But There Are Some Good Effects Too. Posted 2 March 2009.