Is that a trophy our Pierce is holding? Looks more like a canister but if it is a trophy then whoever designed it is miles ahead of whoever designed those Emmy Awards trophies which looks like a health hazard with it’s pointy wings which could easily poke a person’s eyes. 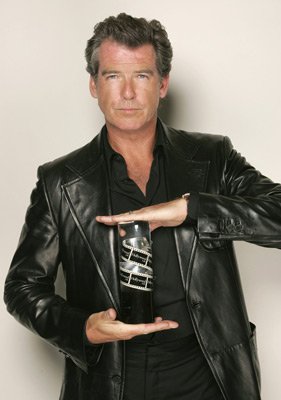 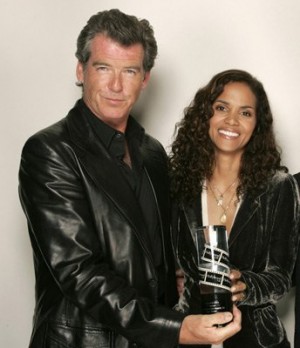 Is that a mike, Pierce honey? 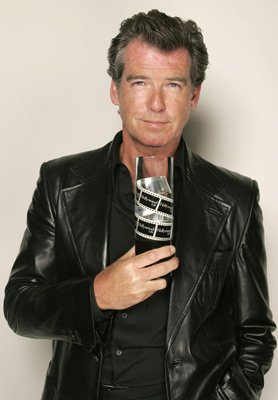 Here’s the Irish stud wearing a leather jacket by Angels and Bermans in his James Bond movie, Tomorrow Never Dies. 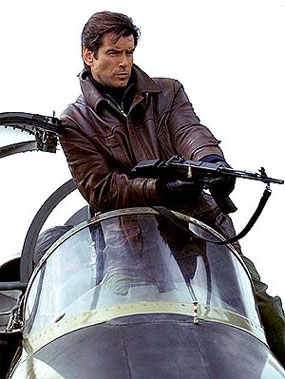 If you are like us, you’d go “Hmmm, we’d never heard of this Angels and Bermans, why is it not famous in the fashion world?” The answer to that, fellow Famewatcher, is that Angels and Bermans isn’t really what you’d call a fashion house a-la Dolce and Gabbana, Ralph Lauren, Armani, and the others. 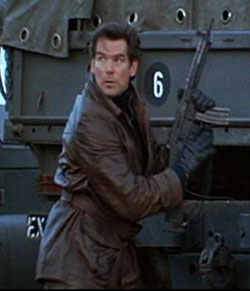 According to wikipedia, Angels is a supplier of costumes in the entertainment industry. So those who make movies will go to Angels and Bermans if they want a costume to use in their films. This means that although you’d like to buy yourself a leather jacket worn by Pierce Brosnan in Tomorrow Never Dies from the same company who manufactured it, it ain’t gonna happen because the Angels is not in the business of selling clothes to the public.

Anyhoo, let’s have more Pierce Brosnan leather jackets, shall we? Pierce and his wife American journalist Keely Shaye Smith. Lucky gal, no? For those of you who are wondering, Pierce and Keely have two kids named Dylan Thomas Brosnan and Paris Beckett Brosnan. 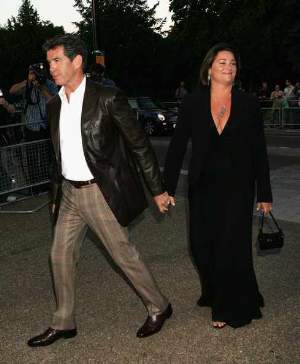 Pierce Brosnan in his 2007 film, Shattered, where he played the role of kidnapper Tom Ryan. 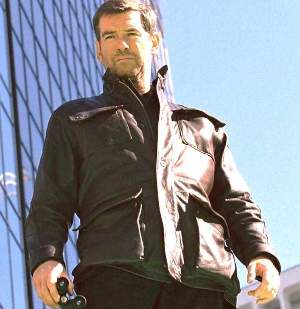 Here’s an older leather-wearing Pierce Brosnan looking as shaggable as ever. 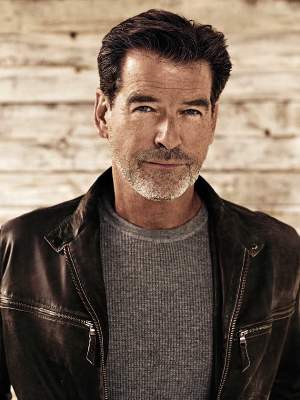 Before we say goodbye, here’s a shirtless Pierce from his younger days. We saved the best for last, didn’t we? Sure he ain’t wearing any leather but we think a shirtless Pierce is hotter than a leather-clad Pierce. You agree, right? 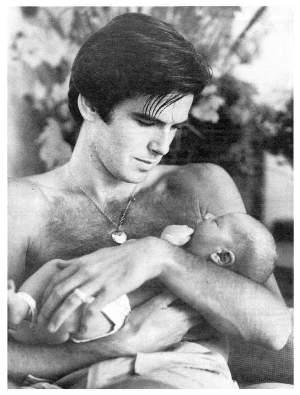 If we are not mistaken, the pic is from Remington Steele, his very first project when he landed in the United States.