Michael Buble Hot in RCMP Uniform. Who is hotter in an RCMP uniform: Michael Buble or Paul Gross? You can check out Paul’s RCMP photos in an earlier post we wrote eons ago, Canadian Mountie Uniform: Paul Gross in Due South. 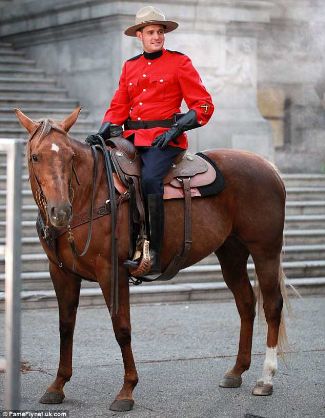 So who is hotter between these two Canadian blokes? Hard to decide, no? Paul obviously looks more fit in his uniform but his pics were taken when he was much younger so, really, its not fair to compare them.

So, since we love both guys, let’s just say that they are equally hot, shall we? Hehe. 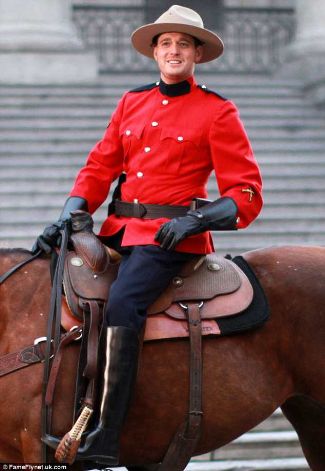 Why is Michael wearing an RCMP uniform? Is he trying to reprise Paul’s iconic role in Due South? We hope that’s the reason because we love, love, love that TV show but nope, that’s not the reason. According to the Daily Mail, the Grammy-winning singer’s costume is for a music video for a Christmas single which will be released this Christmas season. 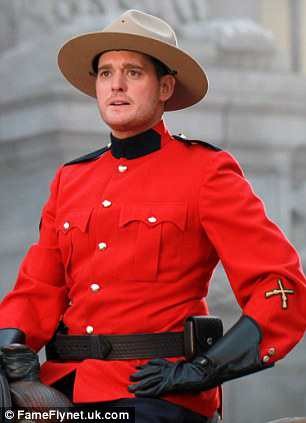 By the way, a commenter (named Nova Scotia Guy) on Daily Mail is claiming that Michael’s RCMP uniform above is all wrong.

We’re not really versed on what’s the right way to wear a mountie uniform so we can’t confirm if he is correct.

Anyway, this is what he is saying about the wrongness of Michael’s ensemble: “who dressed him? wrong hat and three sizes too large, regulation is brown gloves, brown boots with spurs, Sam Brown belt with holster and lanyard, riding breeches with yellow strip; as for the saddle / tack etc wrong / wrong / wrong and the horse should be black!!”

So there! Do you agree with Nova Scotia Guy?

Update: To help settle the matter, here’s what wikipedia says is what an RCMP “Review Order” ensemble consist of:

So it looks like Nova Scotia Guy does know what he is talking about, no?