Kyle Richards Plastic Surgery: Before and After Full Body Liposuction. She used to wear baggy clothes (see photo above) to hide some — in her mind — less-than-appealing curves. Now, Kyle Richards wears tight body-hugging outfits to highlight some curves that women in their forties would die for (see photo below). 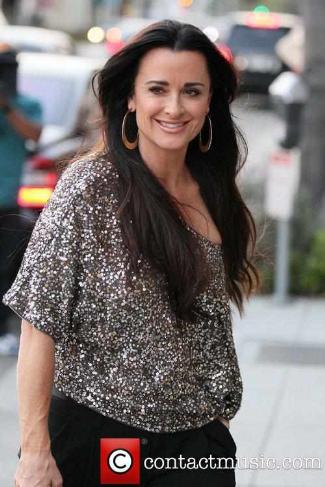 What changed? According to Radar Online, the 43-year-old star of Real Housewives of Beverley Hills has undergone a full body liposuction which helped her get rid of the unwanted curves. Why did she do it? Apparently, she was intimidated by her fellow Housewives.

Says a source who blabbed to Radar Online about Kyle Richards plastic surgery: “The deciding factor for Kyle was the housewives trip to Las Vegas. They were filming around the pool and Camile and Brandi immediately stripped down to these teeny tiny bikinis – and, needless to say, they both looked stunning. Kyle felt so intimidated, there was no way she was taking anything off in front of the cameras, she felt totally inadequate.”

So not wanting to be the heavy duckling in a pool of bikini-clad stunners, Kyle decided to go full speed ahead and herself some full-body liposuction. Continues the RadarOnline blabber: “Don’t get me wrong. Kyle was by no means overweight, she eats healthily and she works out, but she just has certain areas of her body, like most women, that she isn’t happy about. So she decided to get a little help.”

The Radar Online Source adds: “Kyle went and had full body lipo. The doctor sculpted and toned her perfectly and she was completely thrilled with the results. It wasn’t a dramatic difference, but the overall change is amazing. She looks and feels better than she ever has. She only lost about 15-20 pounds in total, but it was all from the right places, the trouble spots that she couldn’t get rid of through exercise or diet alone.”

So how is she doing now? Reveals the source: “For the first time in years, Kyle feels great in a bikini and she is flaunting the results in tight little dresses and little short shorts. She finally feels she can hold her own against her cast members and it has done wonders for her self esteem.”

So there you have it — now you know more about this Kyle Richards plastic surgery. With the wave of his/her surgical wand, a surgeon sculpted the heavy duckling into a pretty light swan. Actually, we disagree with the source who claims that there is no dramatic difference for Kyle because based on the before-and-after photos we see above, the result of her full body liposuction is pretty dramatic.

Now, before some of you fellow Famewatchers think that Kyle’s positive transformation should encourage you to go ahead and have your own full-body liposuction, you should first check out an earlier post we published about Kathy Griffin’s Botched Liposuction.

You should also be aware of the possible side effects of large volume liposuction (the list below is taken from perfectyourself.com) which are as follows:

You don’t want to damage some vital organs mainly because you want to look thinner, do you?