Kathmandu Bubble Jacket on Tom Hardy & Other Celebrities. British actor Tom Hardy keeps himself warm in chilly Vancouver with the help of a Kathmandu bubble jacket. The Inception star is reportedly in Canada’s Hollywood North (or does this title refer to Toronto?) to shoot his movie, This Means War, alongside Reese Witherspoon and Chris Pine. 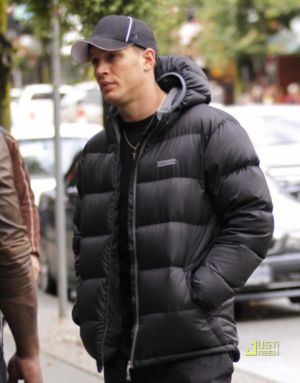 The plot of the movie is as old as Methuselah (imdb: Two lifelong best friends wage an epic battle against one another after they both fall in love with the same woman) but we will probably watch this just because we like Tom, Reese, and Chris. 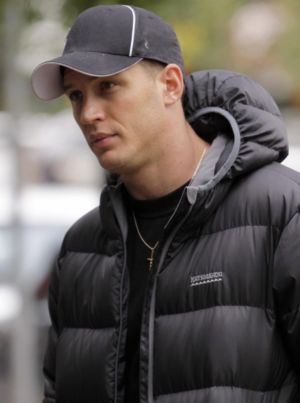 Want more male celebrity jackets? Or would you rather check out these fall coats for men.

Oops, want more Tom Hardy fashion style? Then go check out our post on Tom Hardy’s Underwear. Surely, a man’s underwear – although hidden from others for the most part – is also considered “fashion”, right? We’re pretty sure our good friend Kevin will agree. If he doesn’t, well, we actually don’t care if Kevin does not agree that underclothes are also fashion. Hehe. After all, don’t models wear nothing but undies in some “fashion” shows?

Aside from Inception star Tom Hardy, another famous Hollywood actor spotted wearing a Kathmandu bubble jacket (specifically the Kathmandu Duck Down Jacket Longline for Women) is Mrs. Tom Cruise Herself or who most of us know as Katie Holmes.

Katie’s Kathmandu jacket (and the one Tom is wearing above as they’re actually the same) is known for its DWR (Durable Water Repellency) finish which means this outfit should keep you dry from the rain or snow.

By the way, for those of you who are wondering, Kathmandu is a clothing brand (although it also sells equipment) based in Australia and New Zealand. Obviously, it was able to expand in the U.K. as well as in North America.