Kaka Shirtless, Underwear, and Speedo Photos. If you are living in a football-crazy country, there’s a good chance that you are already familiar with Brazilian football star Ricardo Izecson dos Santos Leite aka Kaka. 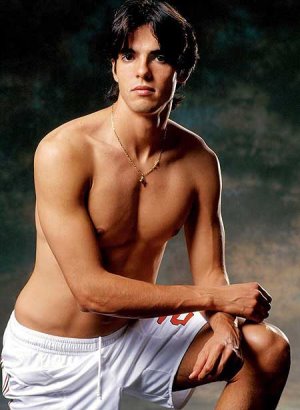 If you live in the United States, then there’s a good chance you won’t know anything about him at all. Good thing the folks at the Mirror have compiled a list of ten things we should know about this hottie:

1) Ricardo Izecson dos Santos Leite was born on April 22, 1982 in a middle class district of the Brazilian capital Brasilia. His nickname derives from younger brother Digao’s inability to pronounce ‘Ricardo’ properly, and while the word has no specific Portuguese translation, it does mean something unsavoury in his adopted home of Italy.

2) His family moved to Sao Paulo soon after, and despite initially harbouring ambitions to be a tennis player, Kaka signed up for a local youth side. He was spotted by scouts from local side Sao Paulo, who enrolled him into their youth set-up. A slight child, he was also placed on a special diet to bulk out his rakish frame.

3) He signed his first Sao Paulo contract aged 15 and won the Copa de Juvenil with the club’s youth team in 2000. Kaka’s career was almost over before it started, though, when he suffered a spinal fracture in a freak swimming pool accident. Remarkably he wasn’t paralysed – and, in fact, made a complete recovery, something Kaka attributes to his intense religious faith (more of which later). 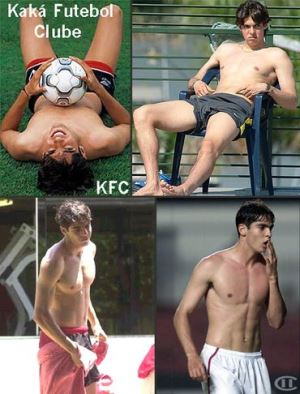 4) He made his first team debut in January 2001, and went on to make 77 appearances for Sao Paulo, scoring 30 goals in the process. Here’s a fan-made montage commemorating Kaka’s time in Brazil:

5) He made his debut for the Brazilian national side in the 6-0 friendly win against Bolivia on January 31, 2002. He was part of Luis Felipe Scolari’s 2002 World Cup winning squad (although only played for 25 minutes of the tournament), was named captain of the 2003 CONCACAF Gold Cup side and has gone on to claim 62 caps. He’s also scored 23 international goals.

6) AC Milan signed him for $8.5m in 2003 – a sum that owner Silvio Berlusconi described a few years ago as “peanuts”, but which now seems even more ridiculous, given Manchester City’s reported bids. Kaka was an instant hit, scoring 10 goals in his first season and helping his new side to the Serie A title.

7) During his five and half year-stint (so far…) at the San Siro, Kaka has earned a reputation as being one of the greatest footballers in the world. He’s scored 86 goals in 244 appearances, won the Champions League (in 2007) and lit up pitches across the continent with skills like these:

8) Cristiano Ronaldo might think he needs a large mantelpiece to show off all his gongs, but he has nothing on Kaka. Since moving to Europe, he’s won over 20 different major awards, including the Ballon d’Or and FIFA World Player of the Year (both in 2007) and the Serie A Football of the Year twice (2004 and 2007). Kaka was also named one of Time magazine’s 100 most influential people in the world of 2008.

9) His wife – Brazilian beauty Caroline Celico – was aged just 18 when the couple tied the knot in December 2005 at the Reborn in Christ Church, Sao Paulo. Kaka was reportedly a virgin when he said “I do”, but he’s not any more: the couple had their first child – Luca Celico Leite – in June last year. Here’s some footage celebrating the couple’s romance:

10) A genius on the pitch, Kaka is also something of a saint off it. An evangelical Christian, Kaka has frequently prayed on the pitch, and was famously pictured in this ‘I Belong To Jesus’ T-shirt following AC Milan’s 2006/07 Champions League triumph.

He has ‘God is faithful’ stitched into his customised boots, is a member of the Atleta de Cristo (‘Christ’s Athletes’) organisation and donates 10% of his salary to the Church, was the youngest ever Ambassador Against Hunger for the United Nations’ World Food Programme, and cites his favourite book as – yes – the Bible.

…..
Update: More Kaka Shirtless and Speedo Swimsuit Photos. We are updating this post to bring you more Kaka shirtless photos. You know, like this one: 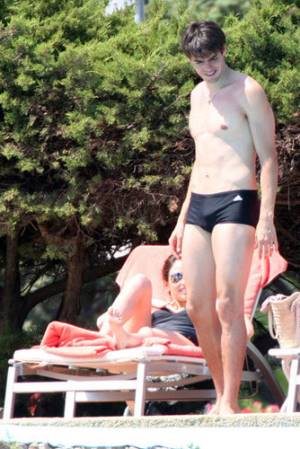 We’ve been referring to his swimwear as a Speedo but, technically, it is actually made by Adidas. 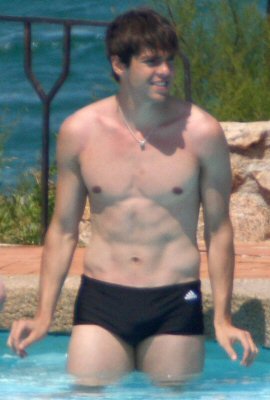 Another photo of our Kaka wearing his Adidas swimsuit. 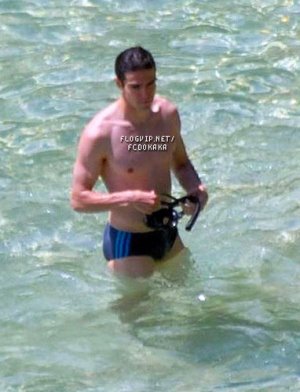 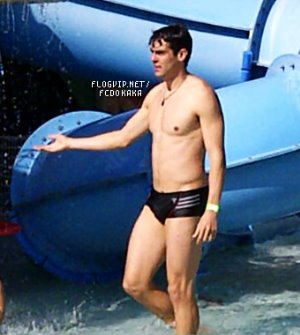 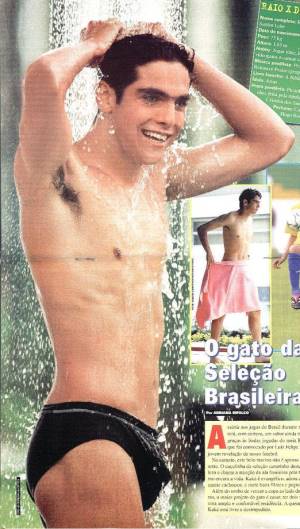 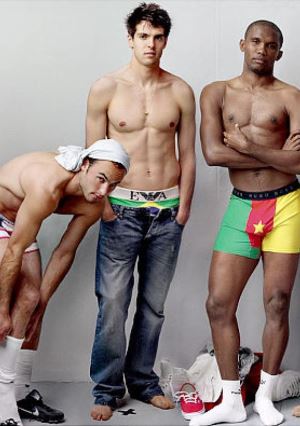 Hmm, who you pointin’ at? 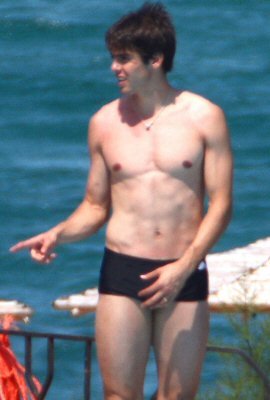