We wonder what our Jude is laughing at? Maybe he’s laughing at someone’s joke but the jokester is off camera? Or maybe he is laughing because he remembered his happy days growing up as a kid?

Our friend Kevin says Jude is actually smiling at someone. We’re not sure though if we agree that the actor is smiling. Looks more like a laugh to us. Watchu think? 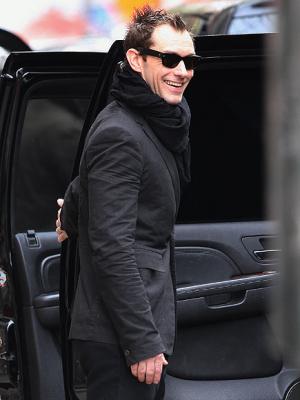 So, what brand of leather jackets does the Sherlock Holmes actor wear? Well, he was seen wearing a shiny Carol Christian Poell Overlock Leather Jacket so he must be a fan of the Austrian designer. 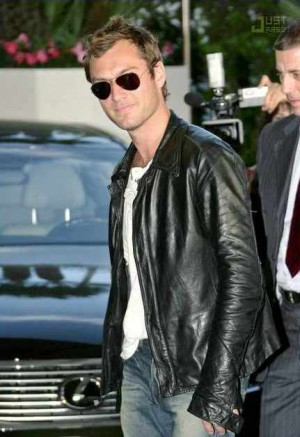 Of course, if you are a Jude Law superfan, you must already know that he served as the face of a Dunhill advertising campaign. Check out these photos of the 37-year-old English actor all cleaned up (he’s been slovenly these past months, isn’t he) while wearing various Dunhill menswear. 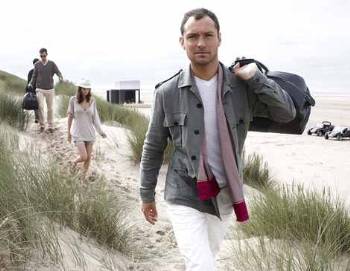 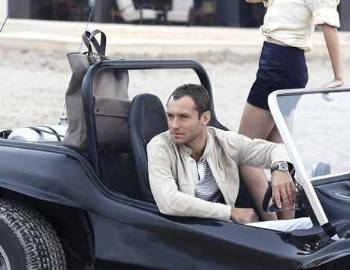 Want more Dunhill suits for men? Or would you rather check out more celebrity leather jackets? 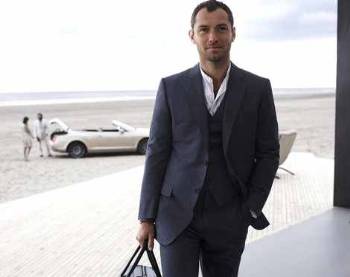 Don’t you just like cleaned-up Jude Law rather than his untidy version. Haha. These pics actually reminded us of the time when he burst into the entertainment scene all fresh and cute in the 1990s. He was everybody’s dreamboat but he probably grew tired of being everybody’s dreamboat so he decided to be just plain “hoboish”. Way to drive away those who lust after you eh, Jude?

We think we’re going to end this post on Jude Law’s fashion style with this very interesting photo of the English actor. 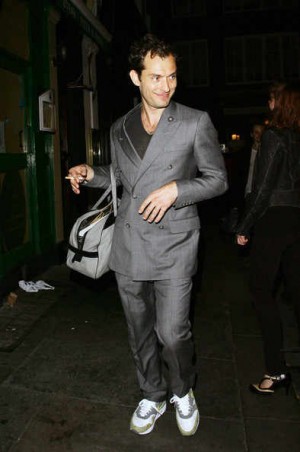 We don’t know if he’s like this when the camera is not looking (Kevin is hoping so) or whether he’s gaying it up for the paparazzi but this screams, “Jude Law is sooo gay!”

Debate in the comments whether Jude Law is gay or not what with all the baby mamas running after him (okay there’s only one right). It’s obvious to us that Jude is as straight as an arrow but Kevin believes otherwise. What do you think?