Too bad we can’t find a bigger pic from the one above. But here’s a shirtless pic of the British-Italian twins. If we found shirtless photos of these two earlier, we surely would have included them in our post on Shirtless Twins. 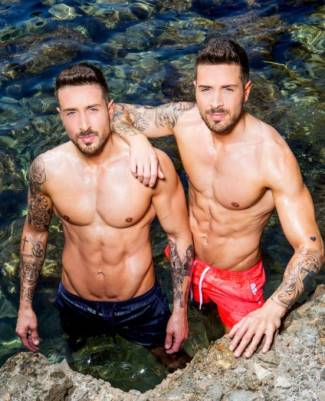 Anyhoo, John and Tony are property developers from Manchester. They joined the Love Island reality show determined to bring home the prize.

More about the Alberti twins (via metro.co.uk):

What they look for in a girl…
Tony: ‘A great body. I’ve got the whole package so I want the girl to have it too. She has to be sexy, classy and feisty, and ideally brunette and tanned too’.

John: ‘I like a confident, feisty girl. And it’s good if she’s family orientated too. I mainly go for brunettes but I do have a bit of a thing for blondes too.’

What turns them off….
John: ‘Chavvy girls. I like a bit of class. I don’t mind if they wear casual wear but I like them to look nice if we’re going out for an important night.’

How they woo a lady…
John: ‘We’re Italian, we invented romance! We wine and dine them. We love the dating scene. To be honest, girls usually come over to us. We’re quite well known where we live, and people like to come and take a photo, they like the novelty of us being twins.’

Tony: We pick them up from home, we’re old school gentlemen. We take them out and romance them with good conversation and lots of flirting.’

Let’s end this post with a photo of these hunky twins. 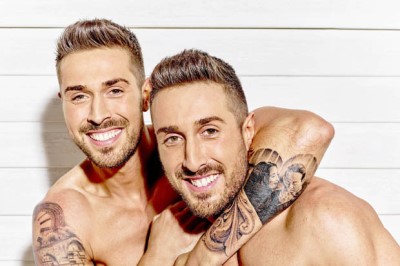 We won’t even try to pretend to tell these twins apart because we know it will end in failure.