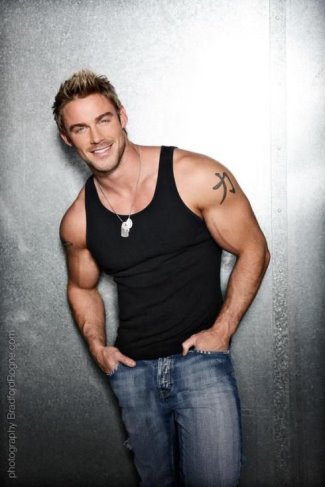 Aside from the sexy Bob Harper, there’s another reason to watch The Biggest Loser in the person of hunky hunk hunk Jessie Pavelka. Hunkiness must be in the Pavelka genes because Jessie’s cousin, Jake Pavelka of The Bachelor fame, is also a hunky hunk hunk.

More about Jessie from his NBC profile:

An internationally recognized fitness expert for over 10 years, Jessie Pavelka has an impressive track record helping others develop practical solutions to lose weight and live a healthy lifestyle. In the U.K., he starred on Sky TV’s “Obese: A Year to Save My Life” as well as “Fat: The Fight of My Life,” helping overweight women and men dramatically improve their health and their lives. He also trained the masses on ITV’s “Motivation Nation,” where he encouraged viewers across the U.K. to make one small change each day in order to reach their fitness goals.

In the U.S., Pavelka was the featured trainer on Lifetime’s “DietTribe” and hosted a series of exercise programs on OWN called “Wake Up Workout with Gaiam.”

In 2005, Pavelka started a business with fellow trainer David Rylah, training bariatric patients for pre- and post-gastric bypass surgery, as well as training those who were overweight but didn’t qualify for the surgery.

The Corpus Christi native played football at the University of North Texas and later became a professional bodybuilder and NPC fitness competitor. Through those experiences, he learned how to train his own body to become bigger, stronger and faster, and he found that even small changes in nutrition and exercise can have a huge impact. As a trainer, he now teaches his clients the power of one small change. 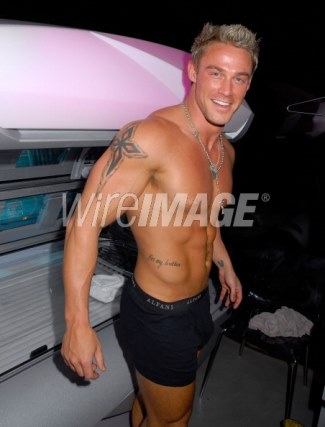 Ever heard of Alfani underwear? This is the first time we hear of it but The Underwear Expert has some info about Alfani undies:

Alfani Underwear for Men uses natural fabrics like cotton, featuring a double-pouch fly that truly supports the male physique, with an elastic band featuring the Alfani logo. The brand produces an extensive range of apparel that encompasses everything a man can wear underneath. What sets them apart is the feel and form of how they make their product. Garments that serve their purpose with enough frills to set them apart, but with a type of design to appease the man that prefers the classic over the trendy.

Is he wearing briefs in the pic below? We can’t tell. 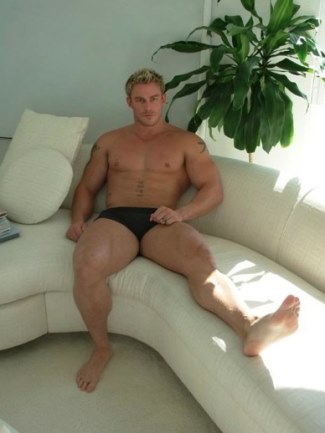 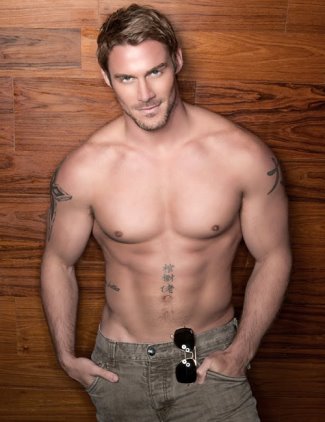 Jessie Pavelka Gay or Straight? He is quite straight according to our friends at gayorstraight.com:

Jessie is, in fact, very much married to Canadian film and television actress Sitara Hewitt. The couple have a four-year old son named Rowan.

Question to you Famewatchers? Who is hotter, newbie trainer Jessie Pavelka or veteran trainer Bob Harper?