The subject of the Seinfeld star’s hair has been explored before by gossip sites such as TMZ which had this before and after photos with one showing Jason’s shiny half-bald pate and another which shows him with a full head of hair. 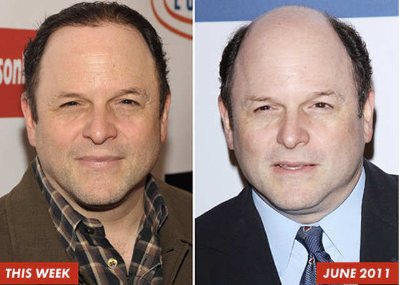 Speculations about Jason’s hair “situation” prompted him to send a very long message to his Twitter followers which goes: “Since a significant number of you have asked about my new head, I thought I’d share what’s going on. I decided to make the change for a combination of professional and practical reasons.”

Well here’s the rest of the statement which is worth a read:

JASON’S STATEMENT ON JASON ALEXANDER HAIR TRANSPLANT:
The way my hair has receded in the last two years was best defined as “dorky”. I started balding at age 17 and after first being sad, I really embraced it. I was always cast older than my actual age which generally meant better roles. And for the most part, the way I was balding always looked kinda good or good enough to my eye and more importantly, to my wife’s eye. But most recently, the look lost any kind of impression other than purely comical. I”m happy to be able to sport that kind of look for characters but I didn’t want it to be the only kind of characters I could be considered for.

Also, there was a practical element — onstage and even to a degree on film, my head had become a big beacon, reflecting light in a very obvious and distracting way.

My wife and I discussed it and came up with 3 options – do nothing and accept it; shave my head (but I thought that might limit my castability even more) or put some hair back.

I thought about grafts or implants but frankly didn’t trust the results would be good enough and also wanted to retain the option of playing truly bald characters. So I began looking for a hair system.

What you see on my head is a really good, semi-permanent hairpiece. By semi-permanent I mean that I can wear it constantly for weeks at a time, if I so choose. I can swim, shower, work out — whatever. It stays on. Or I can take it off any time of any day I choose. The reason it looks thin is that I challenged my designer to make me a piece that would look very similar to the way I did 10 years ago. So, it looks like a guy who is losing his hair and isn’t an artificial mop of hair that I never had. The designer was dubious at first but he actually loves the look now. And the fact is that we are still playing around with the shape and density to make it as flattering and natural looking as we can.

In a few weeks, I may very well talk about who makes this system so that you can pursue it with them if you wish. But in general, for those men and women who have hair loss issues, I can tell you that these systems have become very easy to wear, very easy to handle and the adhesives that have developed give you great flexibility in regard to how often and how long you wear your system.

You will likely see me wearing my hair more often than not in public but I have no shame in being seen as little old me, either. What I don’t want to do is draw a ton of attention to it by wearing it one day and not the next. If you see it often enough, your eye just adjusts to it and you really don’t notice.

So yes, I’m still bald and yes, just like others in my profession who have to either wear make-up or dye their hair or undergo surgery, I now do a little something. It’s honestly no big deal for me and hope it’s not for you either.

Thus endeth the hair mystery and hopefully answers the questions of those who were curious.

So there is no Jason Alexander hair transplant. He is wearing a hairpiece instead. It actually looks very, very good, no? So, where did Jason get his hairpiece. Well, according to a press release on prweb.com, Jason’s natural-looking hairpiece is from a company called Farrell Hair Replacement. 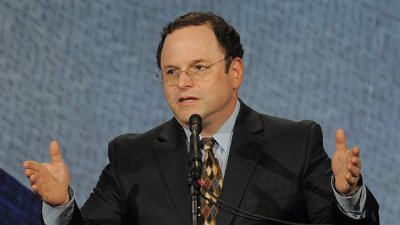 The company adds: “It is true that Farrell Hair has been working with Hollywood celebrities for a long time, but Jason Alexander has made a special difference. Farrell Hair is extremely grateful to him for telling his fans everything about his new hair system. His mind blowing acknowledgement of hair systems came in one simple sentence ‘I’m still bald, I just wear a toupee’ as he was explaining the mystery of his reappearing hairline. Hats off to Jason!”

Huh, other celebrities have asked the helped of Farrell for their “hair issues”. Who are these celebrities? Our first guess would be Jeremy Piven — see Jeremy Piven: Hair Transplant or Toupee King. Let the speculations begin!

Jason Alexander Hair Transplant: Before and After Photos. Posted 5 September 2012.