It’s the singing geek James Wolpert. Here’s a shirtless photo of the bespectacled cutie which we grabbed from his Twitter account (you can follow him at @JamesPWolpert). Is he camping in the woods or something? 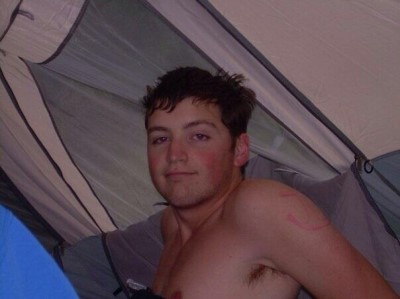 Aww cute! A baby-faced guy with a ribbon on his hair. Our friend Deena says it looks kind of gay but who says men should not/can not wear ribbons on their hair? 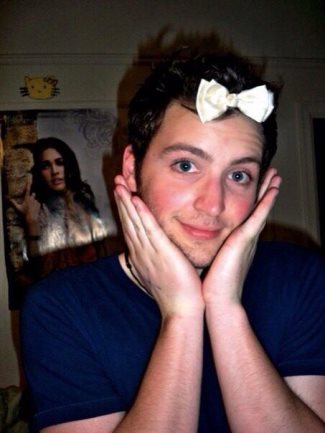 How cute is our Mr. Wolpert when he’s wearing a suit? Does he remind you of the days when singers were nifty dressers a-la Frank Sinatra?

By the way, did you know that James is related to a famous celebrity? Was it ever mentioned on The Voice that he is a cousin of actor Jonathan Groff? Maybe it was mentioned and we missed it. Anyhoo, according to Lancaster Online, Groff encouraged James to audition for the show:

At a family Christmas dinner in 2012, and at the urging of his cousin, actor Jonathan Groff, a Conestoga Valley High School graduate who has appeared on Broadway, on television and in the movies, James Wolpert took a train to New York for an open audition.

Says James of his famous cousin (via Lancaster Online):

“He’s been an incredibly supportive figure in my life. Jonathan Groff is just the nicest person in the universe. He’s so sweet and so genuine and so approachable and relatable that it astounds me sometimes. I’m really proud that he’s come so far, and that he’s my cousin.”

Question to Famewatchers in the know: Does James have a girlfriend? Who’s the lucky girl? Do tell us in the comments because inquiring minds would like to know :-)

Want more hunks from The Voice? Go check out Blake Shelton and His Underwear. Hehe.