Is Lenny Kravitz gay or straight? The first time we saw him in Hunger Games we were like, “Wow! He is so effective playing a gay stylist. Maybe he is gay in real life?” Turns out that he is not.

He’s just a really good actor. Turns out also that before he turned to acting, he’s already an established name in the music world having won several Grammies and other music awards. 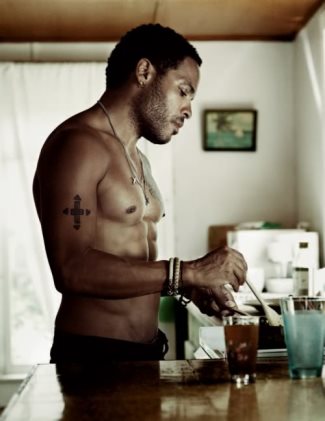 Lenny was in a recent episode of Ellen where he revealed that his older fans know him from his music while his younger fans know him as Cinna in Hunger Games. [Want more Hunger Games hunks? Check out our post on Sam Claflin’s Underwear Photos.] Here’s a vid of Lenny’s interview with Ellen Degeneres where the talk show host tries to play Cupid by fixing him up with Carmen Electra.

Ellen need not worry about Lenny because he’s not exactly a sloth in the dating department. Whosdatedwho.com tells us that he had a relationship with (dated/married/engaged/had a fling/engaged) the following famous girls: Nicole Kidman, Adriana Lima, Devon Aoki, Lisa Bonet, Vanessa Paradis, Kylie Minogue, Madonna, Natalie Imbruglia, Isis Arruda and more.

If that’s not proof that Lenny is as straight as they come, we don’t know what is. Anyhoo, here’s what our friends at gay-or-straight.com say about the “is he gay” question that some of you wondered about:

As for the character he plays in Hunger Games, Lenny revealed in an interview with MovieLine last year that he drew inspiration from a bisexual friend when he played the role:

So then: Is Cinna gay?
I have no idea. I have no idea. I played him right in the middle, and one of the inspirations is a friend of mine, actually, who I grew up with. He’s bisexual and you could think he’s gay, you could think he’s straight, you’re not really sure. It’s very subtle. You wouldn’t know it, but Cinna’s speech patterns and the way he enunciates was kind of based on this person that’s just a friend of mine, who I thought was a good example.

Now that we settled the “is he gay” question, the next question that some of you fellow Famewatchers are asking is, “Boxers or briefs?” Well, he apparently wears neither if an old San Francisco Chronicle article is to be believed. Here it goes:

Daily Dish (sfgate.com): Rocker Lenny Kravitz’s success with the ladies could be down to the fact he prefers wearing no underwear. The singer — who has dated Nicole Kidman — has revealed a penchant for going without his briefs, in a bid to keep “things really simple.” New York-born Kravitz says, “Underwear is just an extra thing I don’t need. I like to keep things really simple.”

Do you know of any other celebrity who wants to keep things simple by not wearing underoos?