Blake Shelton Underwear, Wedding, Awards. Eight years later, we finally have a photo of Blake Shelton in his underwear! Yay! Not only that, we have him wearing his tighty whities while singing in public too. And, get this, it isn’t just any ordinary public place, he sang in his underwear during an episode of The Voice where he serves as one of the judges. But is this all true? 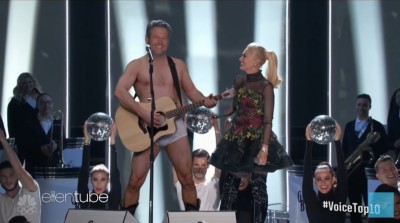 Nah, it ain’t true at all. The video, from which these two images were screencapped, were digitally altered as a joke by the staff of The Ellen Degeneres Show when Blake’s wife, Gwen Stefani, guested on the morning show. They actually did a pretty convincing job, if you ask us. 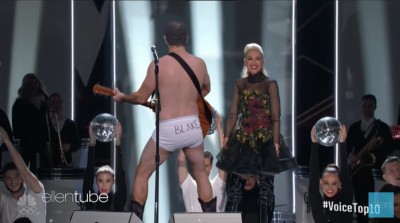 Since this is an update, we should note in this post that Blake tied the knot with Gwen Stefani last July! They’ve been in relationship since 2015 but they decided to make it official, with formal blessings and all, this year. Naturally, being A-List singers, they made it to the cover of People Magazine. 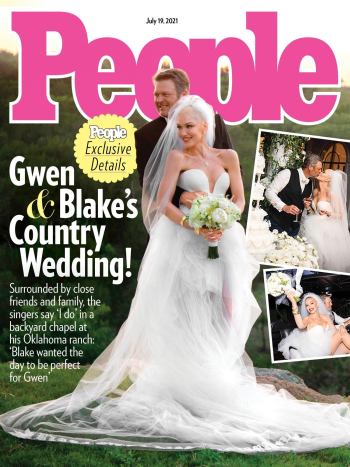 Of course, this ain’t the first time either of the couple made it to magazine covers. In fact, Blake was the cover boy of People Magazine too when he was named by the mag’s S*xiest Man Alive in 2017. 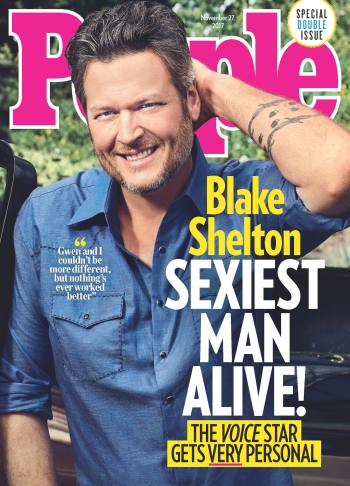 Blake Shelton Awards. Did you know that he still has to win a Grammy? What a travesty!!! He was nominated nine times but the silly voters opted to give the gramophone trophy to someone else. However, according to wikipedia, our Blake has won a total of 112 awards from several bodies such as the Academy of Country Music, ASCAP, Billboard, Country Music Association, and others. Here’s the singer receiving his trophy as the Top Country Artist at the 2017 Billboard Music Awards. 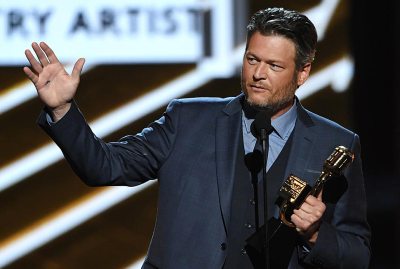 Blake Shelton Young. Here are some photos for those of you wondering what he looked liked as a youngling: 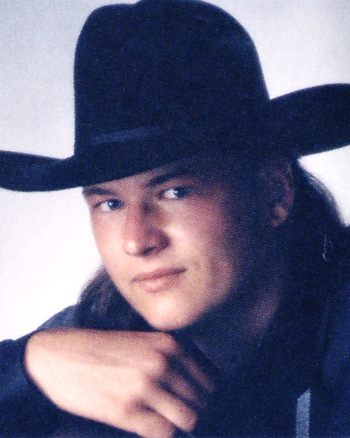 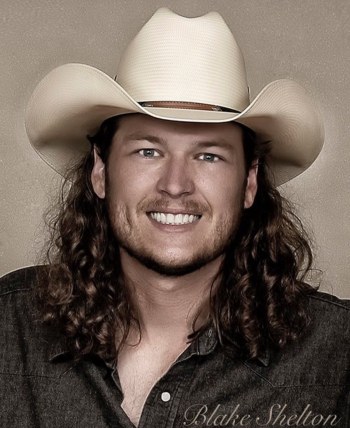 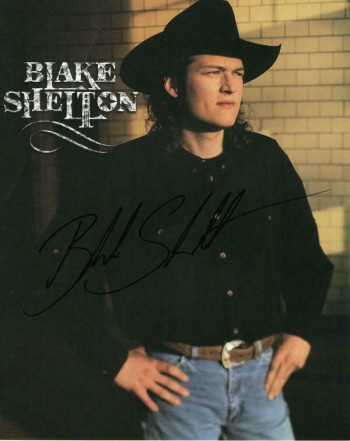 …..
Blake Shelton Underwear: Does Man-Kissing Bandit Wear Boxers or Briefs (Posted 24 April 2013). Does Blake Shelton wear boxers or briefs? When asked the question on the red carpet at the 2010 CMT Music Awards, he answered that, at the time of the interview, he is wearing neither boxers or briefs but a banana hammock. You, of course, already know that banana hammock is another term for Speedo swimsuits, right? 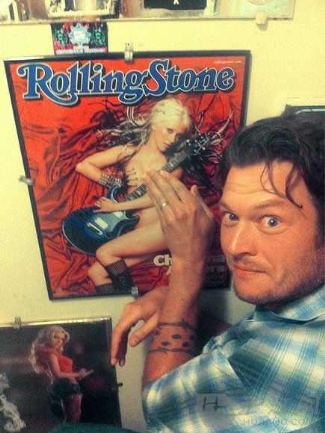 Looking for a picture of Blake Shelton wearing a banana hammock (or boxers or briefs) is like Harry Potter looking for horcruxes; they must be out there but they’re very hard to find. The closest thing to a Blake Shelton underwear we came across the internets is this pair of pink undies which a gutsy and lucky fan brought to Blake for his signature. As you can see in the upper right corner, he did sign this underwear which can be worth thousands on ebay. Hehe. 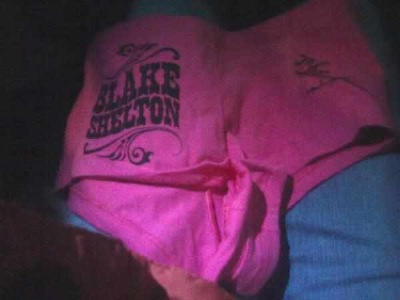 Now, although he kinda frustrates his randy fans by not posing in his underwear (or, at the very least, going shirtless in front of the camera), Blake is keeping things interesting by stealing kisses from his man friends. Kinda gay but its not really gay if you are doing it oh-so-publicly as Blake does. If you’ve been watching The Voice, you’d know that his object of affection is no other than Adam Levine [see Adam Levine Underwear] who he tried to kiss during a recent episode of the show. And it ain’t the first time he tried to do that too. 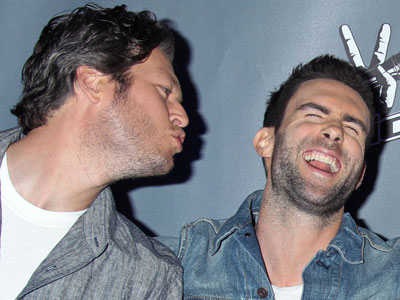 Actually, Blake has been vocal about his Adam man-crush. Here’s what he said last year about the matter (via Frontiers LA): “All I have to say is, it’s true: I have a man crush on Adam. It blows me away people can pick up on that just by watching that on television. I want to kiss him. I want to kiss him so bad. I don’t care if it’s mutual or not. Can you honestly tell me that you don’t have a little bit of a crush on Adam? He’s sexy, is the word I’m using.”

Now, Adam may not be reciprocating Blake’s kissing attempts but other The Voice personalities welcome Blake’s “kissiness”. Like fellow judge Ceelo Green for instance. 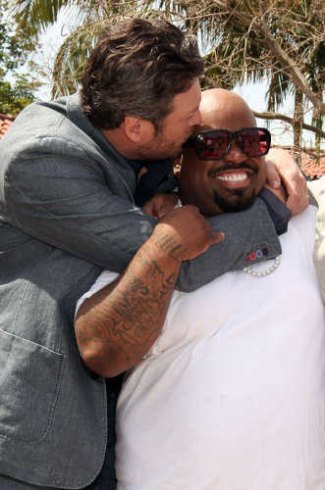 Blake tries to steal a kiss from fellow country singer Brad Paisley who looks like he’s trying to wriggle out of it. 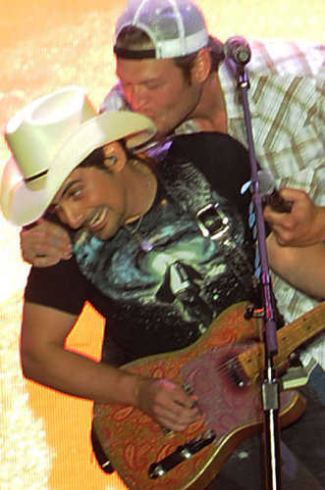 Luke Bryan has no room to wriggle out of. 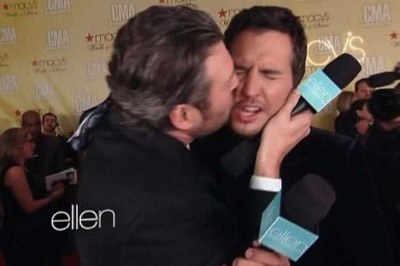 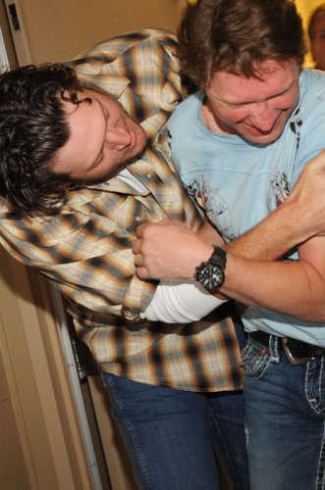 For his part, Keith Anderson is like, “Go ahead, kiss me!” 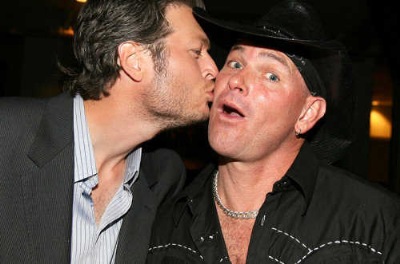 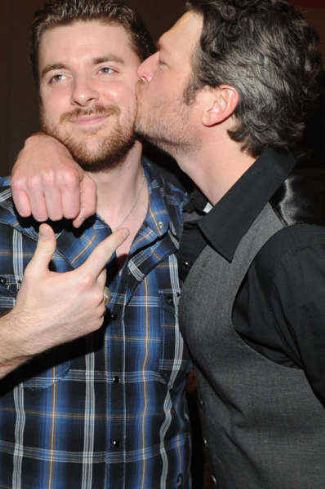 Oh the other hand, Trace Adkins is like, “Keep your distance, man. We’re just here to sing.” 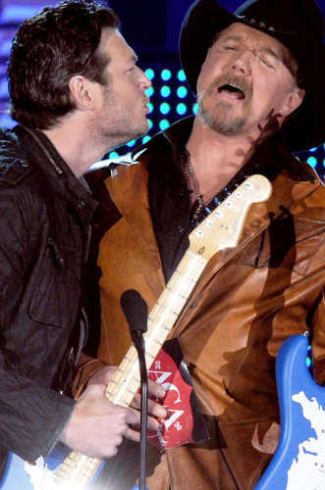 Meanwhile Jamey Johnson (aka country Jesus) is thinking, “Should I reciprocate or should I throw this drink on his face?” 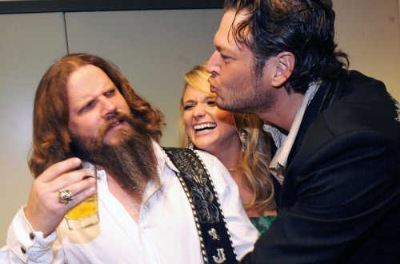 What would you do fellow Famewatchers when Blake Shelton tries to kiss you?