Gotham Leather Jackets: Who among your favorite comic heroes will look good rocking their leather jackets in Gotham, the upcoming TV series expected to premier on Fox towards the end of the year. It looks like Detective Harvey Bullock (to be played by Irish Canadian actor Donal Logue) will be the first to wear a leather jacket. 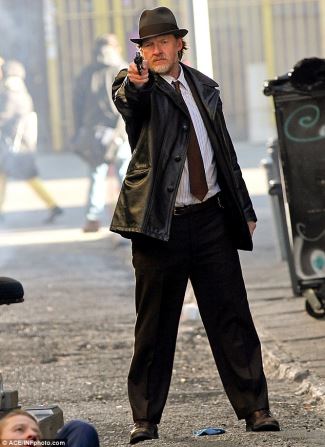 If that ain’t a definition of a badass we don’t know what is? Let’s take a closer look at Harvey Bullock’s leather jacket, shall we? 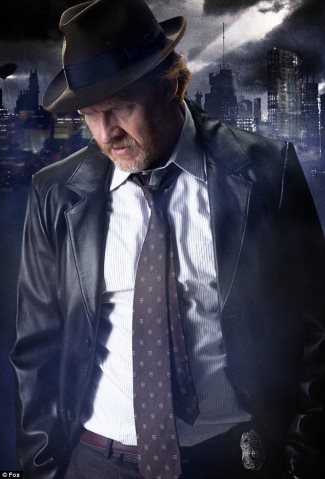 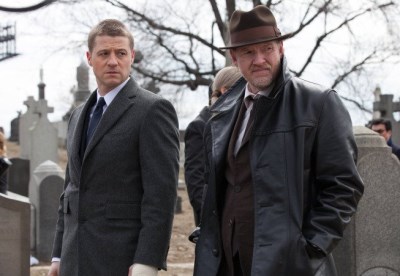 When will Gordon get his leather jacket? We’re pretty sure he will have one eventually. Meantime here’s Ben McKenzie looking good in a moto leather jacket. 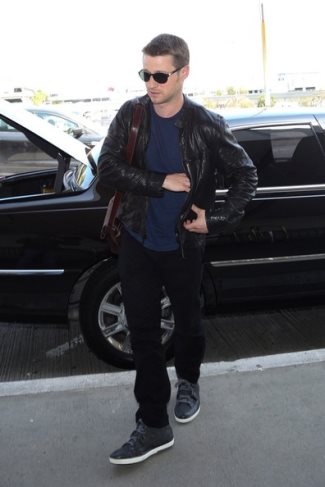 So far, another character spotted wearing a leather jacket is Selina Kyle (aka Catwoman) played by 15-year-old actress Camren Bicondova.

Another pic of Camren rocking a different leather jacket at the set of Gotham.

That’s it for now, but come back when the TV series starts running because we will be updating this post not only to give you more photos of other Gothamites who love them their leather jackets but to also give info on things such as where you can buy these jackets (if they are commercially available and not custom-made for the show), how much you should budget for them, and that kind of stuff.

We are particularly interested in what the bad guys will wear because bad guys tend to be more flamboyant when it comes to their fashion. We are looking at you Oswald Cobblepot aka The Penguin (played by Robin Lord Taylor) and crime boss Fish Mooney (played by Jada Pinkett-Smith), do not disappoint us.

Here’s the official synopsis for the upcoming TV series from the guys behind the project:

Everyone knows the name Commissioner Gordon. He is one of the crime world’s greatest foes, a man whose reputation is synonymous with law and order. But what is known of Gordon’s story and his rise from rookie detective to Police Commissioner? What did it take to navigate the multiple layers of corruption that secretly ruled Gotham City, the spawning ground of the world’s most iconic villains? And what circumstances created them – the larger-than-life personas who would become Catwoman, The Penguin, The Riddler, Two-Face and The Joker?

“Gotham” is an origin story of the great DC Comics super villains and vigilantes, revealing an entirely new chapter that has never been told. From executive producer/writer Bruno Heller (“The Mentalist,” “Rome”), “Gotham” follows one cop’s rise through a dangerously corrupt city teetering on the edge of evil and chronicles the birth of one of the most popular super heroes of our time.

Growing up in Gotham City’s surrounding suburbs, James Gordon (Ben McKenzie, “Southland,” “The O.C.”) romanticized the city as a glamorous and exciting metropolis where his late father once served as a successful district attorney. Now, two weeks into his new job as a Gotham City detective and engaged to his beloved fiancée, Barbara Kean (Erin Richards, Open Grave, “Breaking In”), Gordon is living his dream – even as he hopes to restore the city back to the pure version he remembers it was as a kid.

We are so looking forward to watching this show. We hope it rates well and goes on to become a hit for Fox.