Cory Michael Smith Shirtless Photos and Coming Out (2020 Update). Want more shirtless photos of Cory? We know you do so here’s some; we grabbed the first shirtless pic below from his Instagram page (follow him @coreymichaelsmith) while the other one and the GIF are from an episode of the TV miniseries Olive Kitteridge. 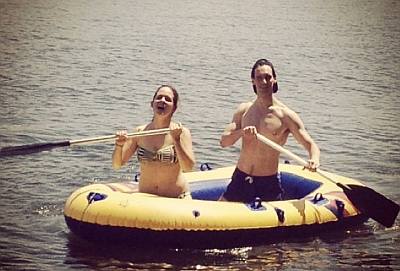 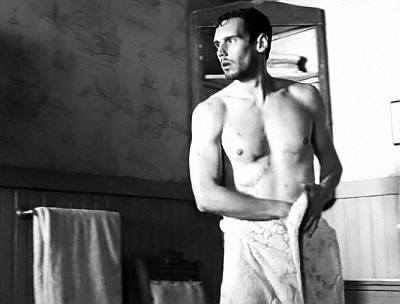 By the way, Cory kinda came out as a friend of Dorothy in a 2018 interview with the Daily Beast while promoting the AIDS drama 1985. From the Daily Beast: “The 31-year-old actor, who has starred in Carol and HBO’s Olive Kitteridge miniseries, is best known for playing Edward Nygma, aka The Riddler, on Fox’s Gotham. ‘There’s something special about telling a story that feels closer to home,’ Smith, who identifies as queer, tells The Daily Beast. ‘I’m not exactly like The Riddler in real life.'”

The actor adds: “I’m from Middle America. I’m from Ohio. I’ve been living here [in New York] for a while, and there are stretches when I don’t see my family often. Going home and that whole charade is very familiar. The first family dinner after a while. Coming out to a family, the fear of that.”

Cory also reveals that his family handled his coming out with “a lot of love,” though it took “a lot of time.”

…..
Cory Michael Smith is Edward Nygma in Gotham (9 July 2014). Aside from Camren Bicondova [see her in our post about Gotham Leather Jackets], another relative newcomer who will be facing the cameras in the upcoming Fox series Gotham is Cory Michael Smith. According to his wikipedia page, Cory started acting only two years ago so getting cast as a regular in one of the most anticipated new shows in television is a big get for him. 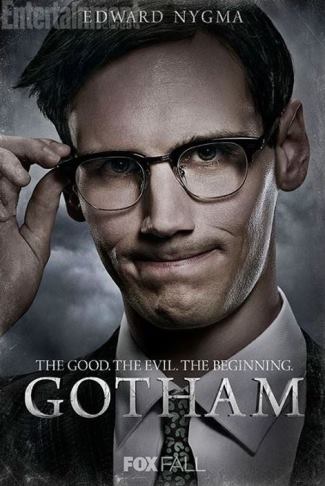 More on Cory’s role as Edward Nygma (the future Riddler) from Entertainment Weekly: “In the Fox project from showrunner Bruno Heller (Rome), Nygma is a brilliant young forensic scientist working for Gotham PD and a penchant for speaking in … rather cryptic language. Inquisitive, eccentric and outgoing — yet socially awkward — he wants to be liked, but he doesn’t quite know how.”

If Gotham turns out to be a hit — and we hope it would be even though our friend Kevin calls it “the silly world of Batman without Batman” — expect Cory’s star to shine brighter in Hollywood. 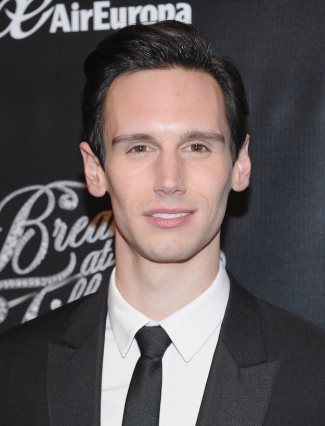 Cory Michael Smith Shirtless Photo. Those of you who are looking for shirtless pics of the future Riddler will be disappointed to find out that the only pic out there is this image from his first Broadway gig, Breakfast at Tiffany’s (photo credit: Sara Krulwich/The New York Times). 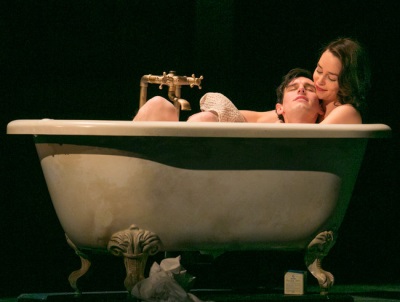 [Kevin says: Ugh! That’s not a shirtless photo. How do you know that he’s not wearing a shirt? I’m not going to say that someone is shirtless unless I really see him without a shirt. We’re not seeing anything here.
We say: Huh? He’s in a bathtub. People don’t sit in a tub like that with their shirt. Use your imagination. Sometimes imagining that someone is shirtless is better.
Kevin says: Ugh! Yadda. Yadda. Yadda.
We say: Shut up. We will update this post when we have more shirtless Cory photos in the future.]

Is Cory Michael Smith Gay or Straight? Or Does He Have a Girlfriend? He played a gay role (more correctly a bisexual role) in an off-Broadway play, Cock aka The Cockfight Play, but this does not mean that he is gay it only means that he is an actor who does not mind doing gay roles. 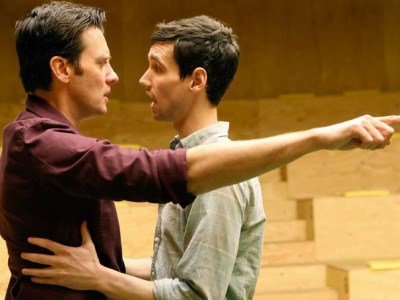 So is he gay or straight? We’re gonna say he’s straight because he was spotted going “touchy touchy” with Breakfast at Tiffany’s co-star Emilia Clarke.

From pagesix.com: “Clarke, who returns as dragon babe Daenerys Targaryen in the HBO series next month, starred with Smith in the ill-fated ‘Breakfast at Tiffany’s,’ and while a source close to Clarke insisted ‘they’re just friends,’ guests saw the pair holding hands and slow dancing at the party after chatting with Taylor Swift and Ed Sheeran. Clarke was previously linked with last year’s Oscars host, Seth MacFarlane.”

So there, now you know! Cory is dating Emilia and Page Six is calling him Emilia’s “beau”.