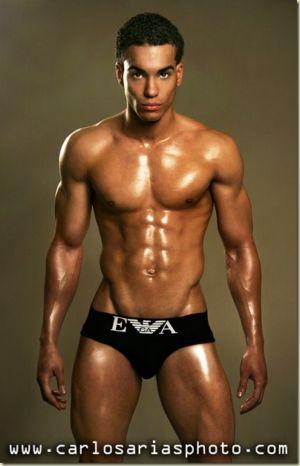 Want more models in Emporio Armani? Or you might want to check out these guys with washboard abs like our model above.

UPDATE: You want more Emporio Armani mens underwear models, don’t you? Well, this update is for you. This brand usually hires famous men such as A-List footballers David Beckham and Cristiano Ronaldo to model for them so its hard to find male models in their Emporios. But this doesn’t men there’s none of them. In fact, let’s check out this hunky and sculpted Belgian model named Henny Seroeyen who rocks his white and tight Emporio Armani briefs. This is how tighty whities are supposed to look, right?

And here’s another model named Sadic Hadzovic looking fab in his black boxer briefs. Sadic is from Montenegro and is also a bodybuilder.

Of course, if we talk of male models looking fabulous in their designer underwear, there will always be a Brazilian hunk in the list. Right? Here’s the gorgeous and hot Evandro Soldati smoldering in his Emporio boxer briefs.

Did you know that the this designer label use to make unitards for men? We didn’t know that either until we came across this vintage underwear print advertisement featuring one of the pioneering male models, Aldo Fallai. Kinda hot, no? We don’t know if Emporio continues to make outfits like this but maybe there’s not a market for it. Or is there, would you buy a men’s unitard? Sure we know that some men buy them like gymnasts and ballet dancers but we don’t think ordinary dudes are into unitards these days unlike in 1988 from when this ad was published. 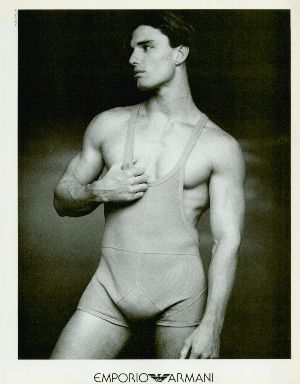 But let’s continue ogling at Emporio Armani male underwear models, shall we? Here’s a gorgeous nerdy Asian guy in his Armani boxer briefs. 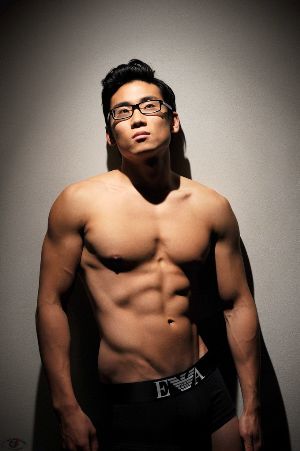 Let’s add more interesting colors to our underwear choices with these red (or pink) tight stretch cotton briefs and boxer briefs. Of course your undies need not be limited to boring white and black colors. You gotta go for red underwear too.