Diego Hypolito Gymnast World Champion. Want more sexy, hunky, shirtless gymnasts? Well, check out Brazilian hottie Diego Hypolito. The guy beat the rest of the world back in 2005 and 2007 when he won back to back World Championship titles. He faltered in the last two Olympics but is raring to kick ass in the world stage again. Now, here’s the shirtless Diego Hypolito shirtless photos some of you are looking for. Check him out rocking the balance beam: 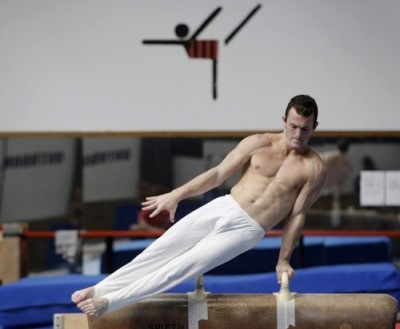 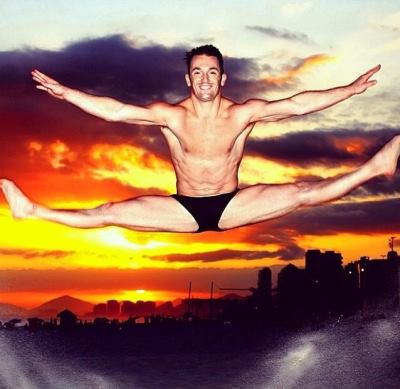 With the boys. That’s an amazing beach. 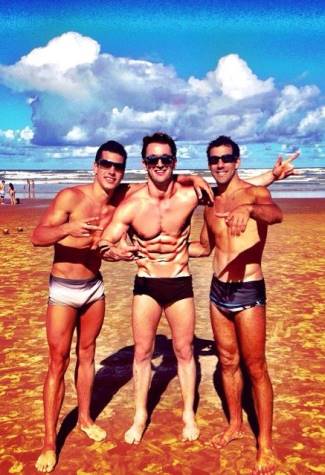 Diego in his swim trunks. 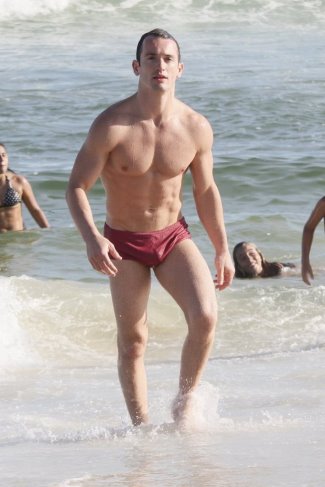 Diego Hypolito Update. If you are wondering what our Brazilian hunk is doing now, well, check out this interview he recently did with Volta Olimpica, a Brazilian website (as translated by Google Translate). It looks like he is preparing for the Rio de Janeiro Olympic Games and it would be cool if he finally grabs a medal in the Olympics. Anyhoo, here’s Diego’s interview:

How was the evaluation of the last Olympic cycle?
My Olympic year was very bad because of injuries. I had to do many surgeries, stopped four times. Surgery, however it helps the athlete to resume training, is very aggressive. Passing the Olympic cycle my goal was simply to take care of the body. I ended up going to the World, achieving the second best score in the world in the year. Were things that made me see that I still have shot at a medal.

You had a tumultuous year in 2013 The difficulties were overcome?
I had much less motivation. Got fired from my club (Flamengo), stopped the train in Rio because the gym was demolished, the gym Flamengo caught fire. It was a year of many transitions. I missed most in training, I was late. In 2014, I realized that I needed to change to get chance to be medalist. The most important is to keep workouts, have discipline, weight maintenance. I got to weigh 76kg, 68kg I am today. This is an absurd difference.

What has changed in this new phase?
I wanted to leave a little of the focus of top athletes. I have no competitiveness as may exist at the international level. I concentrate on preparing myself to do my part, and this team helps me a lot with that. The weather is very good in training. If another Brazilian, American and the other guy are the best, patiently, this is life. But that is not for lack of training. With the new team, I’m much more relaxed and less anxious. Last year, there was a time when I could not sleep with the vagueness of the club, where would my team.

London was different.
Very different. It was a cycle in which I operated on me seven times in three and a half years. I had no time to workout. In the week of the Olympics I did not train because I hurt my foot. I left a lot less frustrated than in Beijing but did not like having fallen away. If I hit and not gain, I have to accept. Fall on your face and fall on my butt is not something I like (Hypólito suffered two falls in their presentations in the soil of the Olympics). Beijing, I learned that I am not invincible. I arrived in London with another thought. In Rio I want to be whole and continue the training profile. I’m feeling more confident in training, more daring.

Maturation brings some advantage over opponents?
Not much advantage. I grew up. If I get to the Olympics and not win a medal, will be very different. I’m doing what needs to be done to be medalist, but many athletes do. I do not know if I will win a medal, but I’m training for this. And most importantly, regained happiness.

You came to Porto Alegre for a period of training. It’s hard to find sites with complete structure in Brazil?
Out of Brazil there is a lot more advanced structure, which helps a lot in the development of athletes. Brazil has world and Olympic champions, and will host the Olympics. Only now it’s no use. Lack almost a year to compete in the classification. It was to have been done long ago. Still need a training center. Already existed in Rio de Janeiro, and I can not understand how you can demolish one before making another (the training center was demolished and the new will be ready in December, according to the COB). It is a big mistake that there is no place like this in Rio. Going to require a lot of athletes result, and has no structure within two years of the Olympics. The devices are coming, but that does not exist. Who decided to make the event were not athletes.

Do you believe that there has been evolution of fitness in recent years?
Had evolution of athletes, but structurally, only now, a year before the Olympic rankings, which will begin. I do not think right. What good will it be, but if I do not talk, no one will talk. It is not a certain situation. Who decided to make the Olympics in Brazil have had to put equipment in the first year of the Olympic cycle. Then no use complaining if Brazil did not win medals. This should have been done long ago. It is very ugly you expect to spend a World Cup to give structure to the Olympics.