Debenhams Wonderbra: Strapless Bra is Next Big Fashion Thing?. What? A strapless Wonderbra? Yes, my dear, apparently there is such a thing. The bra designers of the new Ultimate Strapless Wonderbra reportedly spent two years to test and perfect this product. And then they got some models to promote the bra in some shopping center in London. 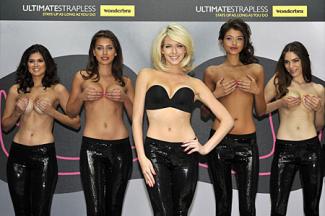 Look ma, no hands! So, Famewatchers, what do you think of this strapless bra? Would you buy one? 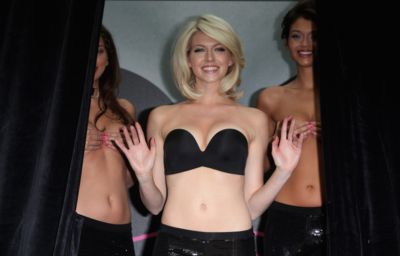 Debenhams Wonderbra Review: A reader Allison sent us her review of the Debenhams Wonderbra and it goes: “Wonderbra Strapless Bras are widely appreciated. They fit well. They support well. Also, as you said, they have put on a lot of time and money in the research and perfection in bringing this product. Heard that the initial reaction to this product is extremely good.”

Louise Goldin’s Conical Cone Bra (posted 07 April 2010). Just how much of a fashion icon is Material Girl Madonna? Well, we’ve been bashing her lately for her silly attempts to stay young forever, but we give her a ten as a fashion icon (in a scale of one-to-ten with ten as the highest). One whose cone bra in the 1980s continues to inspires today’s designers, like Louise Goldin and his conical bra, deserves the highest points in fashion “icon-hood”. You agree, right! 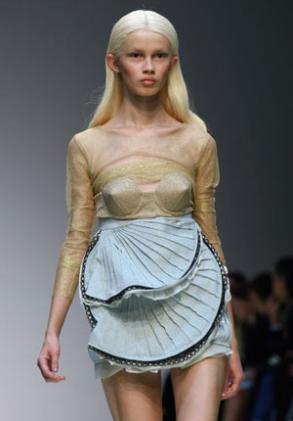 Now what do you think of the growing fascination with the conical bra? Would you wear one? Have you bought one for yourself? Or do you, like our friend Deena, think its a silly thing that should have been left to die in the 1980s like them silly shoulder pads?