David McIntosh Shirtless. We introduced you to him in real military hunks, now we will be seeing more of him because he’s going to be a housemate on the upcoming season of Channel 5’s Celebrity Big Brother. We are talking, of course, about the hunky soldier/model and now reality star David McIntosh. Doesn’t he look oh-so-delish without his shirt? 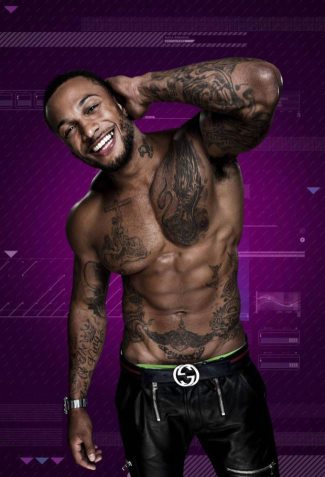 We are, ordinarily, no fan of tattoos but we like David’s tattoos because they look organic and are really good on him.

Is David McIntosh Gay or Straight. Our friend Kevin wishes McIntosh is gay but he is as straight as an arrow. In fact, you can call him a ladies man having dated, to use the word of wikipedia, copious celebrities such as Gina Rodriguez, Danielle Lloyd, Sara Jones, Chantelle Houghton, and Rachel Christie (with whom he has a son). He is now engaged to the sexy Kelly Brook. More about David from his metro.co.uk CBB profile:

Famous for: He was Tornado in Saturday night TV show Gladiators.

What else you might know him for: He’s engaged to British model Kelly Brook and he’s a keen actor and model as well as having trained when he was 16 as a Royal Marines Commando. Wowza.

What’s he going to talk about?: Gladiators nostalgia, popping the question to Kelly after just 12 weeks of dating back in March and crashing a van full of dead badgers.

David McIntosh Underwear Photos. Our soldier has been modeling for sometime now so there’s a whole treasure trove of David posing in his underwear. Here are some of the modeling pics: 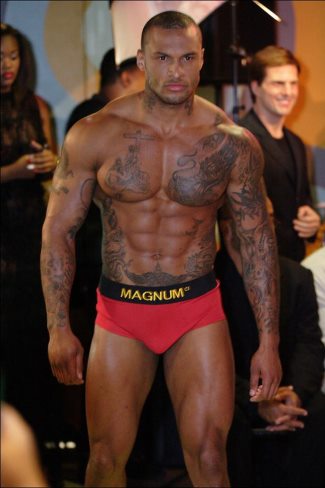 He’s chiseled like a Greek god. David wearing a pair of Evolve underwear, it’s another brand we haven’t heard of up to this point. 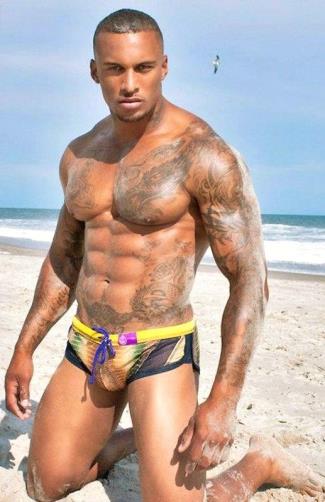 Finally, our David goes to the boxing ring in C-in2 briefs. How (in)appropriate is that? For another celebrity who apparently loves him his C-in2, go check out Cody Calafiore’s Underwear Photos.

That’s it for now. We hope to update this in the future as we monitor David’s journey on the CBB house. Will he win? Will he conduct himself honorably? Will he be the lovable star? Will he be the villain? And, most importantly, will we see him stripping his clothes off?