Damien Walters Gymnast Goes to Hollywood as Stuntman. Ahh, the wonders of Youtube. Damien Walters, a gymnast who previously represented Britain in the gymnastics world championship, is going to Hollywood after his Youtube videos were spotted by Jackie Chan’s stunt agent, Brad Allen. How cool is that?

Update: Sorry Youtube video no longer works. But here are still photos of the guy for those of you who want to ogle at him. Hehe. 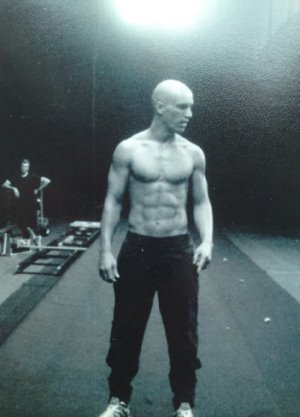 Says Damien of his good fortune: “I thought he was joking at first, but he managed to convince me he was being serious. He said he’d got my number from the YouTube site, checked that it was me, then talked me through his ideas for Hellboy 2.” 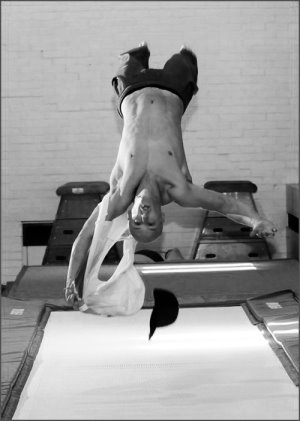 Holy canoly! Color us happy for this guy. Nearly three years after we blogged about him going to Hollywood, we now discover that he’s got an IMDB page which details the movies he’s appeared in. Sure he’s appearing mostly as a stunt double but these are big, big movies we are talking about like, hello, Captain America: First Avenger and Sherlock Holmes: Game of Shadows. Blockbuster, blockbuster, and blockbuster. Good for you, Mr. Damien Walters.

Here are the other movies where Damien did stunts: I Am Number Four, The Eagle, Scott Pilgrim vs. the World, Kick-Ass (assistant fight coordinator, stunt double: Aaron Johnson), Ninja Assassin, Hellboy II: The Golden Army.

He’s also doubling in 47 Ronin, a movie about samurais and that kind of stuff starring Keanu Reeves. Maybe this is Keanu’s comeback vehicle of sorts? It’s currently on post-production and is scheduled for release in 2012.

Oh, by the way, wikipedia reports that our Damien won the 2010 “Taurus World Stunt Awards for ‘Best Fight’ in the film Ninja Assassin”.

And, he may not have doubled for Jackie Chan (who actually does his own stunts) but he did teach Jaden Smith how to do backflips and somersaults. Jaden is Jackie Chan’s co-star in the Karate Kid and the son of Hollywood A-Lister Will Smith.

Here’s what Damien told This is Derbyshire about his experience: “It came about because one of the guys on a film set I was working on was Will Smith’s hairdresser. He forwarded a video of me to Will Smith and his agent rang up, saying ‘I’ve got Will Smith on the phone’. He said ‘I was wondering if you could teach my son some gymnastics’. Jaden had a new movie coming up and he wanted to be a bit more acrobatic. It was pretty weird – it’s not something that happens every day.”

He was also head-hunted by Guy Ritchie for Sherlock Holmes: “I get to meet all of the actors. Robert Downey Jr said he was really impressed with the stuff I did. To be personally head-hunted by Will Smith and Guy Ritchie, well, it doesn’t feel like those sorts of things should happen to me.”

Geeze, we can’t believe we feel so excited for a guy we barely know. Anyhoo, we wish more and bigger projects for Damien in the future. Surely he can be a Hollywood star in his own right, no? If the likes of Vin Diesel [see Vin Diesel’s Leather Jackets] and Jean Claude van Damme can crack Hollywood, then Damien can do that too!