Chris Klein Shirtless Dude of the Day. Woof. Woof. We love us our shirtless Chris Klein. Did you see him on Craig Ferguson? More info about this Illinois hunk after the jump. 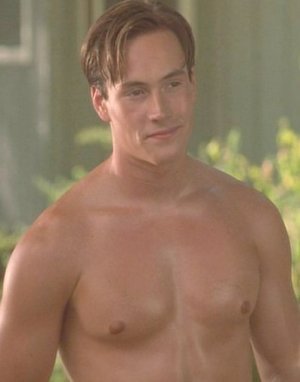 Ten Things You Should Know About Chris Klein

2. He is a middle child. He’s got a younger brother and an older sister.

3. Even though his biggest break is the Reese Witherspoon-starrer, Elections, his first movie appearance ever is actually in an indie film called Clerks where he appeared as an unnamed Store Customer.

4. Klein was discovered by director Alexander Payne in Omaha, Nebraska where Elections was shot. He played a football player, Paul Metzler, the popular football player who ran against Reese Witherspoon for student council president.

5. Chris was actually a senior high school student when he was cast in Elections. He also actually plays football – quarterback and linebacker – for his high school football team. He attended Millard West High School in Omaha.

6. Our hottie was also a college dude. He attended Texas Christian University in Fort Worth, Texas. We’re not sure whether he finished his college degree. Chris was a fratboy (Lambda Chi Alpha) in college.

7. Some of you may remember Chris as Chris ‘Oz’ Ostreicher of the American Pie movies. He is reprising his role as Oz in American Reunion. Watch out for it in 2012.

8. Chris has had some alcohol-related issues. He’s been arrested twice for drunk-driving. In 2010, he attended a 30-day alcohol addiction program at the Cirque Lodge.

9. Who is Chris Klein’s girlfriend? He doesn’t have a girlfriend at the moment but he was in a relationship with the following: Katie Holmes (to whom he was engaged but they broke up the engagement), Lindly Gardner, and Ginnifer Goodwin.

Cutie patootie Chris Klein was a guest at Craig Ferguson’s Late Late Show to promote his movie, Street Fighter: The Legend of Chun Li. We must admit that we’re initially not interested in the movie but maybe we’ll go watch it because of this cutie patootie. Yeah, we’re that shallow :-)