Bryan Mills Taken Leather Jacket: Liam Neeson Movie Fashion Style. What brand of leather jacket is Liam Neeson wearing in his latest blockbuster, Taken 2? Seems like it is not a ready-to-wear designer brand but one that’s costume-designed for Liam.

Why do we say this? Because the guys of filmjackets.com, who are the most informed when it comes to what stars are wearing in their movies, are as clueless as us here at Famewatcher. 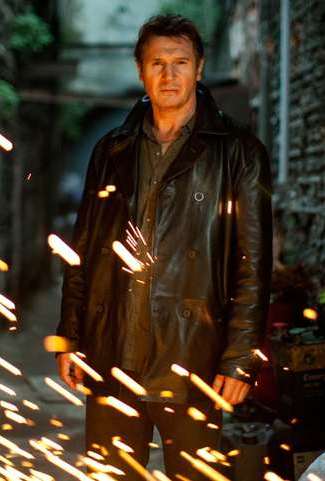 If you know who made this jacket, do tell us in the comments. 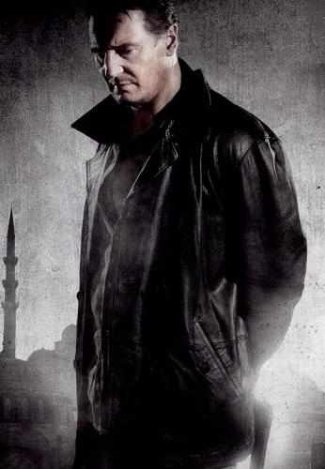 Apparently, our Liam is really really into his leather jacket because he wanted to wear it when he was shooting the movie but was talked to wearing it only towards the end.

Says director Olivier Megaton (how badass is his name, huh?) in an interview with denofgeek.com: “We also had a talk about the leather jacket. For Liam, it was armour, this jacket. And I totally agreed with him, but I said I didn’t want him to have it from the beginning. I said, if it’s armour, then at the end, you put it on and become the soldier. Before that, you’re just a father, trying to escape. You only wear it at the end. That was our only concern about the movie.”

Here’s Olivier and Liam at the Taken 2 set. 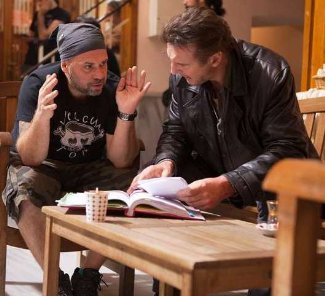 Olivier may have a badass surname (seriously, who doesn’t want to be called Megaton?) but the bigger badass between him and Liam is clearly Liam. And, nope, we are not talking about Liam’s rumored humongous you-know-what when we say he is pretty badass. We are talking about the fact that he is now, at the ripe old age of 60, a really big star in Hollywood. Yay, for Senior Citizens.

What makes his achievement more amazing is the fact that he, at least when he was younger, was known more as a dramatic actor than an actor star.

Its a big thing when action stars like Sylvester Stallone, Arnold Schwarzenneger, and Bruce Willis make it big again via their comeback vehicle, The Expendables. Its a much bigger thing when non-action stars like Liam manage to reinvent themselves successfully in the supposed twilight of their career.

Go, Liam! We hope you continue to kick butts.

Want more Hot Irish Men like Liam? Or would you rather check out these older male celebrities, i.e., Hot Men in Their Forties?