Brooklyn Decker Underwear Model for La Senza. Female underwear model Brooklyn Decker (you might know her as Andy Roddick’s wife) is going to be the new face of La Senza Lingerie according to The Daily Mail. Here are some of her modeling photos. 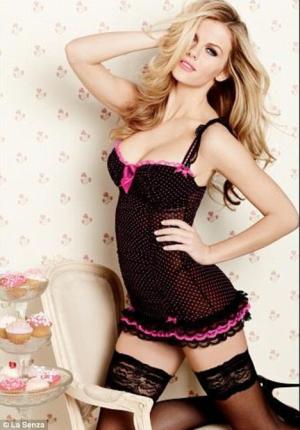 Brooklyn, whose full name kinda sounds like a New York sandwich (that’s according to our friend Deena), is reportedly also going to be the 2010 Swimsuit cover girl for Sports Illustrated Magazine.

Oh by the way, speaking of La Senza models, you might want to check out British soldier turned model Katrina Hodge who also modeled for the lingerie. So what do you think of the above Brooklyn Decker underwear modeling photo? 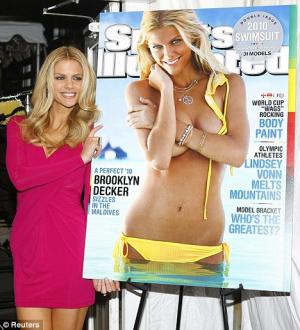 Not only is Brooklyn Decker modeling for La Senza lingerie as we stated earlier. She’s also appearing as the new cover girl of the uber-famous swimsuit issue of Sports Illustrated magazine. This is the first time she made it to the cover although she’d been modeling for magazine.

Not surprisingly, Brooklyn’s husband aka tennis star Andy Roddick is delighted. He tweeted: 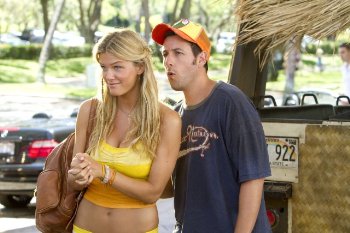 A little over a year since we first blogged about Brooklyn Decker (see related post on Brooklyn Decker Underwear Model), her profile as a model rose to what one can now call “celebrity-level”. Her now being also a celebrity apart from being a model is mainly due to the fact that she was cast in the Adam Sandler movie, Just Go With It.

And, we should take note. Her role is not some bit part like what some models do when they say they’re “actors”. Her role is actually substantial. Because Brooklyn is a fresh face, she made a bigger contribution to the box office receipt that the other female lead who can’t carry a movie of her own. You know who we’re referring to don’t you? We’re not gonna name her because she is not worth naming. Hehe. But we’re gonna repeat what we said. Brooklyn Decker most probably contributed more to the movie’s income than the television-star-trying-to-be-a-movie-star has-been.

Anyhoo, those of you who are fans of Brooklyn and who’d like to see her in more movies would be glad to know that she’s cast in another movie, Battleship, which is a science fiction/action movie scheduled for release in 2012. Again, she’s got a substantial role in this film as the fiance of the lead character. Brooklyn will co-star with big Hollywood names like Liam Neeson, Alexander Skarsgard, Taylor Kitsch, and Rihanna. Pretty cool, huh?

Brooklyn is following in the footsteps of a lot of model-turned-actresses. They include Cameron Diaz, Estella Warren, Vannesa Williams, Aishwarya Rai, Rebecca Romijn, Milla Jovovich, and other actresses who managed to crack the acting barrier.

We wish Brooklyn luck in her new career and we agree with the MTV Networks’ NextMovie.com which named her as one of Breakout Stars to Watch for in 2011.