Emilio Antonio Masella Model and Bodybuilder is Snooki Boyfriend. Jersey Shore reality star Nicole “Snooki” Polizzi has got herself a new boyfriend. And they’re not shy about making out in public. Here’s Snooki and her “boo” kissing at the LaGuardia Airport in New York.

Okay, we gotta admit that we’re not sure if this is photoshopped. The lips are just too ridiculous to not have been photoshopped, no? 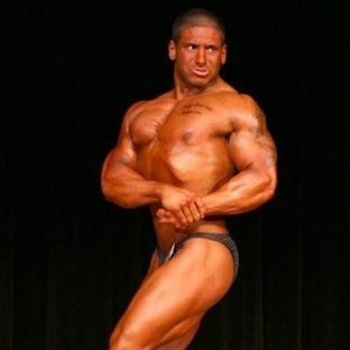 Emilio doing all that “I’m gonna flex all my muscles and do a bodybuilding pose” that bodybuilders are fund of doing. Since he’s all about flexed muscles, you might as well judge his musculature? You think its hot? Is he a hot muscled hunk as Snooki says?

Snooki and Emilio with an even bigger bodybuilder who, if the world is fair, should have his own brand of Snooki. 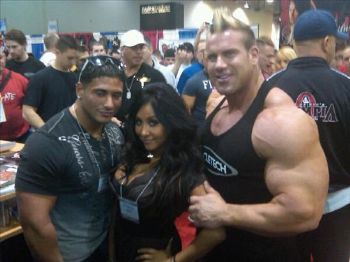 What can Snooki say about her new “boo”? Here’s Snooki (via Radaronline): “He is actually a body builder and works at the gym. He is just, like, my typical guido juicehead with, like, a good personality. I am really excited to like show the public who he is. He is freaking banging. We’re the sexiest couple I have ever seen in my entire life so I am excited for everybody to see that.”

You’re the sexiest couple you’ve ever seen huh, Snooki? What a strange thing to say. But Snooki being Snooki, let’s give her a pass.