Emma Parker Bowles: English Girl in Work Coveralls. If you are looking for a reason to hate Jesse James aka Mrs. Sandra Bullock, here’s a legitimate one: he stole a television idea from an English lady who ended up working as a car mechanic. Seriously, it’s true!

Here’s the dish on Jesse James from Emma Parker Bowles in the Daily Mail: “Anyhow, Jesse and I were going to do this awesome car show together and I was going to ride to glory on his coat-tails. That was the plan. In reality, he stole all my ideas and went off and did his own show. Charming.”

We always suspected there’s something unscrupulous about that Jesse James dude. Fortunately for Emma, she kinda got back on her feet by learning how to become mechanic.

Emma continues: “So one day, I strode into my local garage and asked the owner, Andreas, if I could be his apprentice mechanic. It was as though I had asked him if I could lick his car clean with my tongue. When he realised I was being serious, he said yes, and ever since he has always been friendly and encouraging. Not so much the two Mexican guys I work with, Jamie and Francisco.” 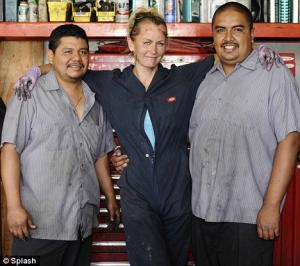 Emma talks about her first days at work: “My first few weeks at the garage were rather challenging thanks to these two hombres. They were appalled by the sight of me – they just couldn’t get their heads round it and stared at me with a mixture of wonder and disgust, as if I was an interesting wart that had just sprouted on one of their fingers. When I kept coming back, day after day, they took to making fun of me. They would make jokes about me in Spanish and then roar with laughter – proper, bent-over-double, tears rolling down their cheeks.”

The boys eventually accepted her as part of the team: “However, when they realised I wasn’t going anywhere, they started to tolerate me. And when they saw that I worked hard and had no shame in getting on my hands and knees and scrubbing the bathroom floor (which was black from oil and grime), they started to like me. The fact that I was prepared to bribe them with chicken tostadas probably helped too.”

More from Emma: “And when they played a practical joke on me and put hot-as-Hades jalapeno sauce in my sandwich (this had them screaming with laughter and rolling around on the floor), I knew I had been accepted. I even have my own nickname: ‘How much?’ I spend a lot of time fetching tools like an eager dog – and there has been a lot of standing over the tool storage unit in a sweat, trying to find the right-sized socket.”

Then she went on to do more complicated things: “After a few months, I was allowed to change wheels and change oil and oil filters, do wheel alignment and unscrew stuff. Because I am studying at the same time – to be an ‘auto repair technician’ – I need one year’s work experience before I can take my certification. It will be a year at Easter.”

Ain’t she awesome? She is, if you are wondering why her name is oddly familiar, related to the future queen of England, Camilla Parker Bowles.

Want more girls in coveralls? Check out this ramp model in Jean Paul Gaultier denim overalls and these famous famous celebrities in overalls.