Adonis Bosso. Photo by Rain Torrado. This Montreal, Canada native is listed by models.com as one of its Top 50 Male Models. Vogue.com also called him the newest star in the modeling world with more than just a pretty face.

Mr. Random Guy We Still Have to Identify. Photo by Robert Voltaire Studio. We spent, like, one hour trying to identify this gorgeous brother in Calvin Klein boxer briefs but the only thing we came up with is the fact that the pic is by Robert Voltaire. If you happen to have a name behind the pretty face, please ID our guy in the comments. Thank you. 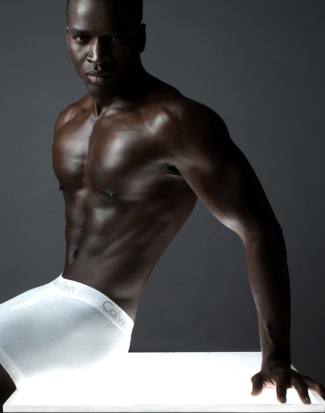 Shermon Braithwaite (below left). Who says models can’t have tattoos? Certainly not this NYC native whose tattoo actually enhances rather than detracts his well-chiseled body. Want more black male models? 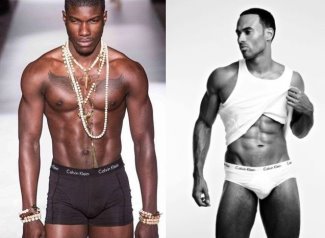 Daniel Louisy (above right). Does British hunk Daniel have the best washboard abs among our list of the ten hottest black male Calvin Klein underwear models?

David Agbodji (below left). David on the runway for Calvin Klein SS 2011. Are these the weirdest outfits ever from CK designers?

Mehcad Brooks (above middle). Damn. Mehcad is fiiiinnnneeee! He is busy these days because he’s a regular in Supergirl which is reportedly one of the biggest hits this TV season.

Rob Evans (above right). Ah Rob. What is he up to these days? We loved him on America’s Next Top Model especially his British accent.

Tyson Beckford (below left). Did you know that Tyson headlined a Calvin Klein underwear campaign back in the 1990s? We’ve spent some time looking for a print version of the campaign but haven’t found one in the internet vault. Still, here’s Tyson stripteasing us with his white CK undies. 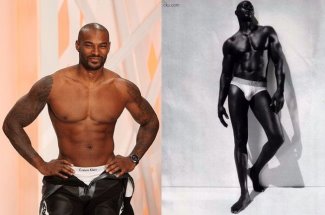 Djimon Hounsou (above right). Do you know that Djimon is now 51 years old? This means he was 43 years old when he posed for the CK ad below. Would you, or your man, have a body like this when you are (he is) 43 years old?

That’s it for now, Famewatchers. Who is your favorite of these black male Calvin Klein underwear models? Want more men in undies, go check out our post on Hot Ginger Men in Underwear.