Beckham Clooney Gay Bromance: George and David Sitting on a Tree (posted 27 February 2009). We’re sure the news that David Beckham is borrowing George Clooney’s Italian mansion will spur rumors that they are, ehem, a “couple”. Get real, people. They’re just “friends”. 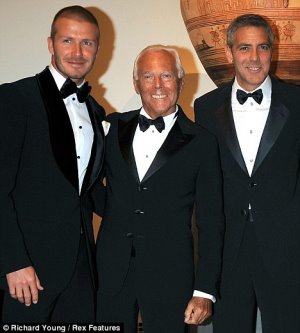 The Daily Mail reports on the Beckham Clooney story: “David Beckham is borrowing George Clooney’s Italian mansion ‘to unwind’ as the transfer battle to secure his footballing talents continues. Clooney has lent Beckham the luxurious £4million lakeside retreat as he waits to see if LA Galaxy will agree to release him from his five-year contract. The villa, on Lake Como, is just half an hour from Beckham’s Milan base.” 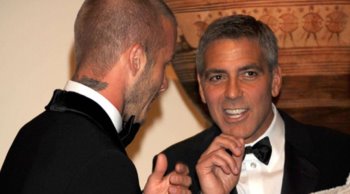 Says a source who talked to Hello! magazine: “George has really taken David under his wing since the transfer trouble started. At the house, David is able to get away from everything, relax and switch off in private.”

Beckham Clooney Denim on Denim Twins. Let us continue chatting about the Beckham Clooney bromance with this photoshopped image of our two A-Listers rocking the denim on denim style. 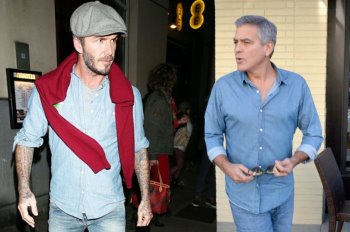 We thought these guys were really together but soon realized that the image is actually photoshopped. Great job, Daily Mirror!

George Clooney Shirtless in Beach Shorts. If you are looking for George Clooney’s underwear, it saddens us to tell you that unlike other Hollywood A-Listers our George doesn’t seem to have any underwear pics. Too bad he didn’t start out as a male model a-la Sean Connery or Mark Wahlberg whose modeling careers brought out a treasure trove of underwear photos. 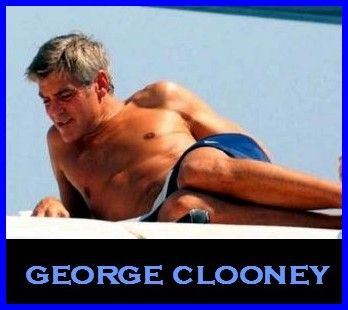 George also appears to have been pretty successful in fending off the paparazzi who, no doubt, would be paid big bucks by the tabloids if they manage to shoot a picture of George wearing nothing but his tighty-whities. The most “revealing” that the papz managed to shoot would be a wet George lounging in his boat (we’re presuming it’s his) with a random hairy guy. 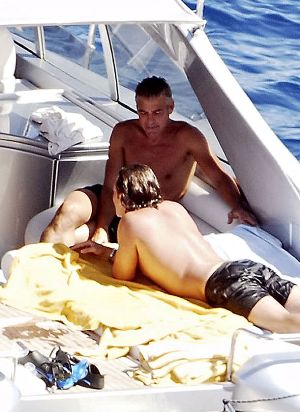 Is George cheating David? What happened to the Beckham Clooney bromance? 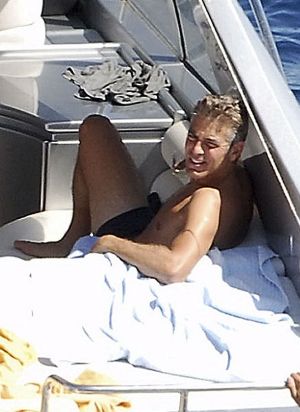 Now, just because we can’t find pics of George in his underwear glory doesn’t mean we can’t imagine him in his boxer briefs, right? In fact, an artist went a step further in her/his imagination and came up with this painting of the Hollywood hunk without any clothes on. Niiiice! 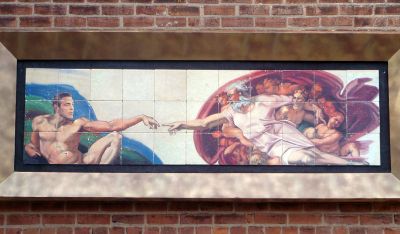 We’re told this mural painting, which is obviously inspired by the Sistine chapel paintings, is called “God’s Gift to Women”. The mural is found somewhere in Cincinnati so look it up if you happen to be near George’s hometown. We hope this is preserved for posterity. In fact, we believe it deserves a place in the Pop Culture section of a museum. Surely if the Smithsonian Institute has a space for Farrah Fawcett’s bikini, it must also have a space for George’s Sistine-inspired nude painting, no?