Andrea Corr Wedding Dress: Husband Brett Desmond. Aww. Isn’t this photo cute? Andrea Corr is dressed in a specially-customised Vera Wang wedding gown when she got married to Brett Desmond. Notice the white platform sandals? Nice. That’s reportedly to help her reach up to her husband (she’s 5″1′ while he’s, well, much taller than her) during the “you may kiss the bride” part. Here’s their really cute pic of the newlyweds. 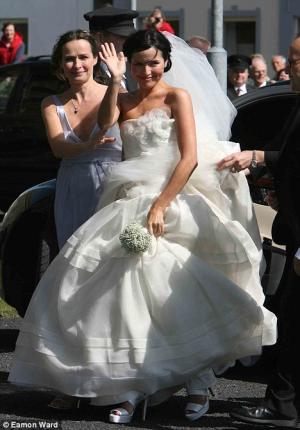 Congratulations to you, lovebirds. May you both live long, prosper, bear children, and grow old together. After all, that’s the purpose of marriage, right? 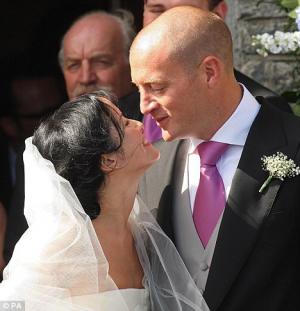 Of course, you know that Andrea is the lead singer of the very popular Irish pop rock band, The Corrs. You also know that The Corrs is some kind of a family enterprise as it is composed of Andrea and her three siblings Caroline, Sharon, and Jim. She went solo when her siblings got married and she also went on to do some movies. Probably the most notable of her movies would be the 1996 movie Evita, with Madonna as Evita and with Andrea as the mistress of Argentine leader Juan Peron. 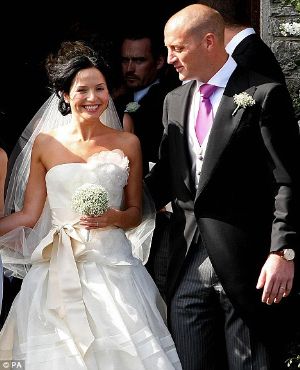 Meanwhile, Brett Desmond, is a stockbroker and is the son of one of the richest men in Ireland, Dermot Desmond. The elder Desmond is actually listed by the Sunday Independent as the sixth richest man in Ireland, he is reportedly the biggest shareholder of Celtic FC, and he once owned the London City Airport. 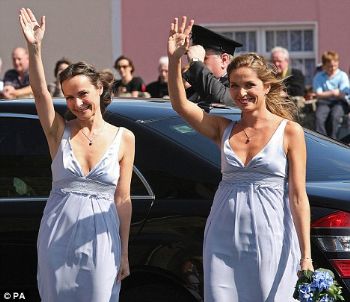 Andrea’s sisters, Sharon and Caroline served as her bridesmaids during the wedding. According to the Daily Mail, “Brett proposed to Andrea with a £60,000 diamond ring at his father’s five star Sandy Lane Hotel”.  Now, that’s a very expensive diamond for sure.

Want more wedding stories? Why not check out this hilarious wedding entrance by Kevin Heinz and Jill Peterson? Or Prince William’s and Kate Middleton’s 2012 wedding?