Zac Efron Shirtless Photos, Washboard Abs, and David Beckham. Oh wow. Check out a shirtless and muscled Zac Efron on the set of his movie, The Death and Life of Charlie St. Cloud. Looks like we are going to take back what we said about him going to be stuck in twink category roles. 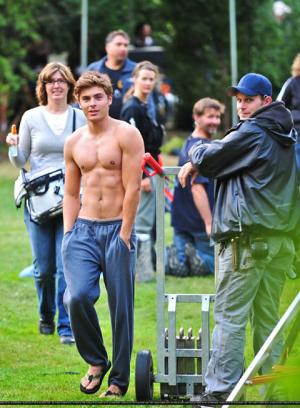 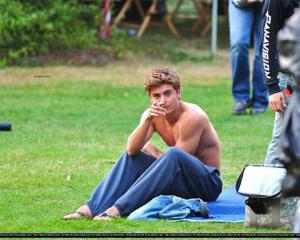 With washboard ab muscles like that, he is going to give his fellow Disney star Corbin Bleu a stiff competition in the “Which teen Disney star is going to make it big as an adult actor?” We now believe that both of them will.

Still photos of Zac Efron from the Charlie St. Cloud movie we mentioned in an earlier post. The boy is turning into a deliciously shaggable man before our very eyes, no?

Are you looking forward to watching this movie? It’s coming out this October so its kinda long but not really that long a period to wait. 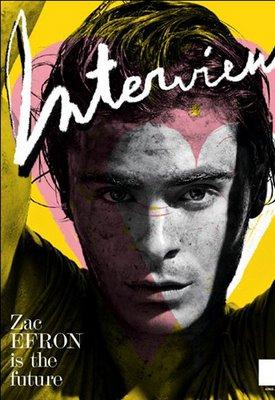 Look who’s going to be the coverboy of Interview Magazine? My, its the King of celebrity tweens himself, Zac Efron. Or as our friend Deena calls him, The Zac. So is The Zac the future as Interview boldly predicts or will he be a has-been three years from now? What do you think? 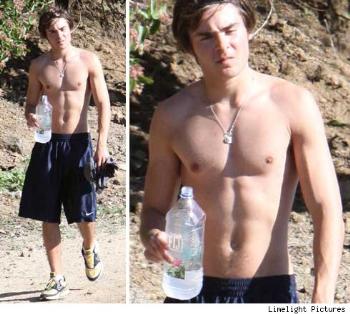 Hey look, someone’s been working out. And if you’ve been working out, you should remove your shirt to show us your abs. Which is what our Zac Efron does here. Nice abs. Go, Zac. Question for you Famewatchers: Are we the only ones hoping that we’re the bottle that this Zac boy is holding? Be honest. You’re wishing that you are that bottle too, don’t you?

Celebrity Bromance: Beckham and Efron Sitting on a Tree
18 July 2008 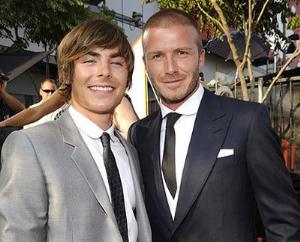 Oh my. Oh my. Oh my again. Is this the hottest or what? Zac Efron and David Beckham in one picture? Our universe just imploded. Now you two silly boys, the next time you get your photos together you better lose those damned suits okay. Do your next shooting in the beach with Zac shirtless and David in his fabulous tight briefs. Get it? Good. 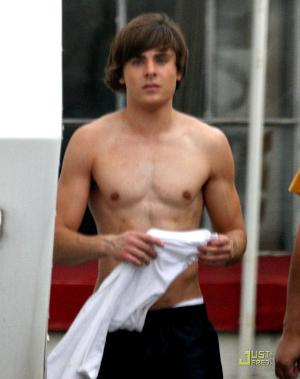 High School Musical star Zac Efron goes for the shirtless look in this photo. Very nice. Way to give back to your fans Zac.

Here’s a question for you Zac Efron fans: when did you become a fan of this actor? For us it would be when we saw him in that hit movie called Hairspray. He was fun to watch in that one, isn’t he? We’re hoping the producers make a second Hairspray movie because we sure want us our Link Larkin.