Thom Evans Shirtless, Budgy Smuggler, and Adidas Swim Shorts. It’s summer. So there is no shortage of men in short shorts. Yay! Here’s the retired rugby hunk (ain’t it a little sad to be retired at 27 years old?) with girlfriend Kelly Brook. The two are vacationing at the Italian island of Ischia where a Global Film Festival is being held which the happy couple are also attending. 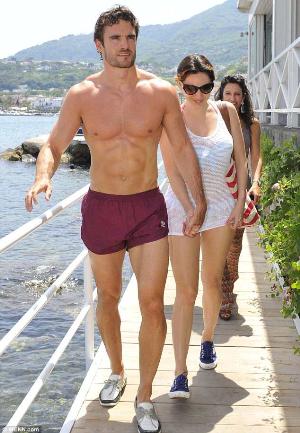 Does Thom have a future as a photographer/director? Check him out below in one of the funniest pics we’ve seen ever ever. Nice stance, Thommy Boy. 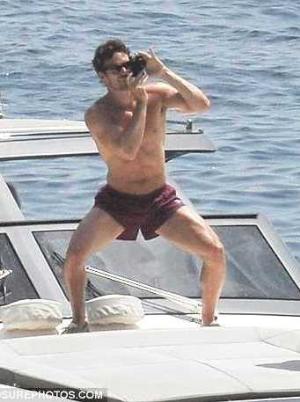 Other photos coming out from Thom and Kelly’s Ischia vacation is the delightful photo of Thom wearing a neon Budgy Smuggler swimsuit. 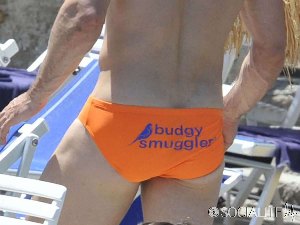 If you are like our friend Deena you’d be going, “Are you sure that’s Thom and not just a random guy wearing a dayglo swimsuit?” Our answer would be the same as what we told Deena, “Of course we are sure! You think we’re so desperate to ogle at Thom’s Speedo photos that we’d make up shit?!!!! Here’s our proof, silly!!!”

Thom and his girlfriend. 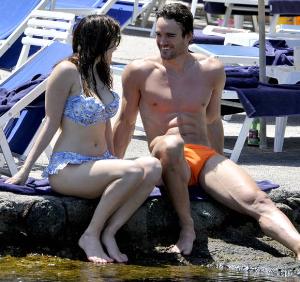 We’d be more than happy to kneel before Thom, like Kelly is doing below, if he is our boyfriend. Hehe. Nah, she’s not really kneeling before him, is she? Check out Thom Evans shirtless while rocking his orange swimsuit.

For those of you who are wondering what Thom is doing these days ever since injuries forced him to retire, the Daily Record states that “he is now pursuing a new career on the track” whatever that means.Wikipedia tells us that he served as an analyst/commentator for ITV during the 2011 Rugby World Cup.

Those are interesting career choices we are happy that Thom’s doing these things. But maybe he should resurrect his boyband music career? FYI for those not in the know: Before he focused his energies on rugby, the Scottish cutie was a member of pop band Twen2y4Se7en and, according to wikipedia, “toured as a support act with McFly, Peter Andre and Westlife throughout 2004”.

Update on Thom’s career track on the tracks: A BBC news report says that he plans to compete in indoor races and is hoping he’d make it to the 2014 Commonwealth Games.

From BBC: “At the moment I am simply gaining some race experience in the 60 metres,” he told the scottishathletics website. “It’s all new but I am enjoying that and the idea is to build some basic sprinting fitness. When I played there for Glasgow Rugby we used to do warm-ups in the Kelvin Hall in the winter so I am familiar with the arena and the track.”

We wish him luck in his new athletic endeavor but we really need a new British boyband that would displace those One Direction pretenders. Haha.

For our previous post on this sexy hunk check out: Thom and Max Evans on Dieux du Stade Calendar and Scottish Men Wearing Kilts.