The Naked Director – Is It Good or Bad? Worth Watching? We just binged the Japanese TV series on Netflix on how a guy named Toru Muranishi (played by Takayuki Yamada) revolutionized the adult video (AV) industry in Japan and boy did we have fun watching it. So for those of you who are wondering whether it is good and worth watching, the answer is yes it is very good and yes you should brew a cup of coffee and sit down and enjoy the show.

In fact, we would call it a must watch for someone who a) loves shows about people who create opportunities out of their failures, or b) loves quirky shows set in the 80s, or c) likes to have a behind-the-scenes look on how adult films are made.

Of course, if you are a Japanophile like our friend Deena, then you need no convincing. But you sure could cite this TV show as an example on why your ears perk up every time you hear someone talk about the Land of the Rising Sun. 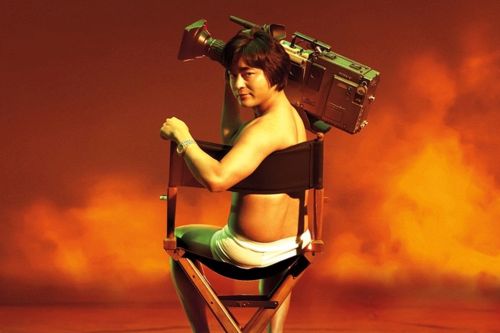 After binging the series, we found out that this is actually based on a real story. Yes, Toru Muranishi is a flesh and blood person and he did legit revolutionize the biz. Meanwhile, the lead female character’s name, Megumi (played by the gorgeous Misato Morita), may be fictional but she is actually based on Kaoru Kuroki who did love to show off her unshaved armpits. She is retired now and is apparently protective of her privacy so don’t go snooping on her.

Now, although we love both Yamada and Kuroki, we think that the most valuable player (MVP) for the series is make-up artist Junko Koseda (played by Sairi Ito). She made us laugh the most when she sprayed some liquidy mix of potato starch, egg yolk, and other stuff on the actress to simulate the “eruption” of the actor. Before Muranishi’s revolution of the biz, performers cannot do the real thing so things like “eruption” has to be simulated.

We were planning to add a GIF of the Junko’s scene-stealer in this post but we’re afraid it is too risque for our Grandma Akita. We gotta make do with this scene of her initial meeting with Muranishi.

Another thing we love about Junko is that she is protective of the actresses. In an exploitative industry, it is good to have someone like her who has your back, even if she herself don’t have any power at all in the scheme of things. We stan you Junko!

We’re also loving Toshi Arai (played by Shinnosuke Mitsushima) because we feel like he sacrificed the most and we fear for what he will become and where the character will lead in the future.

Anyhoo, we’re glad to find out that the show has been renewed for a second season. We are looking forward to it and are curious to see where the show will go. For the time being, check out the Three Musketeers of the Japanese AV industry.