Stephen Colletti Girlfriend or Gay – Underwear, Shirtless, Ethnicity. Time for another famous male celebrity in boxer briefs underwear. This time, let’s appreciate the awesomeness of Italian American actor Stephen Colletti. These photos are from an episode of the now-defunct TV series, One Tree Hill. 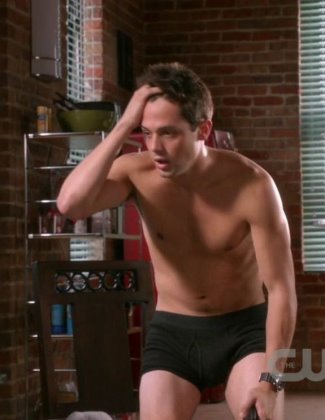 Who wouldn’t want to jump in bed with this guy?

Just so you know, he also wears white briefs underwear.

But don’t ask Stephen whether he prefers boxers or briefs because this is what he says on Twitter: “Boxers or Briefs??” Excuse me, but I don’t ask you, “Thong or Booty shorts.”

Now, that’s throwin’ shade for ya! Before he became a legit actor in One Tree Hill, Stephen’s first claim to fame is starring in Laguna Beach: The Real Orange County. Incidentally, this reality show also introduced us to Kristin Cavallari and Lauren Conrad. The girls may be more famous than Stephen but he has them beat when it comes to acting credits because he nailed a regular acting gig for six seasons on One Tree Hill.

Stephen Colletti Gay or Straight? He is as straight as they come but, for some reason, the denizens of gayorstraight.com have given him a “highly gay” rating:

Do you agree with the above score? Or do you think the “voters” are way off base? We actually think they are off base with their scoring because Stephen is too much of a ladies’ man to be gay.