Sports Briefs Underwear: Athletes in White Undies. From actors tighty whitie underwear, let’s now check out famous sports celebrities rocking their classic white underwear. Who of these eight guys is your favorite in general? And who of them has the best looking you want for yourself or on your man?

Our friend Kevin is going for Beckham (as favorite) and as the guy with the best lookin’ sports briefs. No surprise there really. Kevin is what you can call a Beckhamite or Beckhamista or Beckhamphile which all translate to “crazy superfan who thinks his idol is God reincarnate”. Haha.

Anyhoo, let’s begin our list of Eight Athletes in White Briefs Underwear with John Williams (below middle), an Australian rugby player. A closer look at John’s briefs tells us he is modeling underwear by Van Heusen, an American apparel brand based in New York City.

Our next sports star in white briefs is former mixed martial arts fighter Bo Roberts (above left). If we are not mistaken, he is modeling Todd Sanfield underwear. Can you confirm? The Todd Sanfield is a fairly new (started 2010) underwear brand out of Detroit, Michigan.

David Beckham posing for H&M underwear (above right). Or is it his own underwear line being sold at H&M. Either way, Beckham wins!

Brazilian mixed martial arts fighter Leonardo Mafra (below right) weighs in prior to an MMA bout. Apparently, the UFC has its own underwear label. 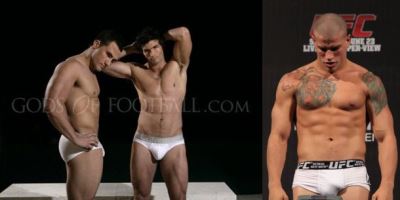 Football gods Luke Grant and Nathaniel Barnes (above left) posing for the Dieux du Stade calendar. The people behind this much buzzed about calendar project are coming out with a 2015 edition which you should support because the proceeds go to charity.

Ahh Ryan! He’s really not wearing sports briefs underwear — because Speedo swimsuits are not underwear right — but let’s include Ryan Lochte (above middle) in our list.

Ben Hunt is an Australian who plays for the Brisbane Broncos of the National Rugby League. He also does some modeling on the side which is why we have this photo (above right).

Ben is modeling a sports briefs underwear from the Active Wear collection of Curb Underwear. Curb is an underwear company based in London which has a slogan/tag line that goes, “Underwear with Identity designed in London, GB and made in Europe”.

That’s it for now fellow AthleteWatchers, what say you of our athletes and their sports briefs underwear?