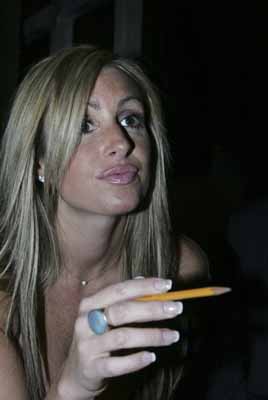 Is Rachel Uchitel, who looks kinda skanky in the above pic, somewhat involved in the Tiger Woods car accident we reported earlier? Did she have an affair with the greatest golfer of all time?

Well, if you believe a woman named Ashley Sampson who’s reportedly a friend of Rachel then Rachel and Tiger reportedly had some affair. She’s quoted by Star Magazine saying:

“In June, she told me, ‘Tiger Woods is blowing up my phone messages!’ Tiger thinks Rachel is staying quiet about their affair, but she told everyone. She told me, ‘I’m having an affair with Tiger Woods. We’re in love!’ “

“I’ve heard him while she was talking to him on the phone and I recognized the voice. I said, ‘Rachel, he’s married,’ and she said Big (bleeping) deal! It’s Tiger Woods. I don’t care about his wife! we’re in love!’ “

“I know for a fact that Tiger and Rachel got together for four days in Los Angeles. She talks about their affair all the time. She thinks Tiger is going to leave his wife and marry her.” 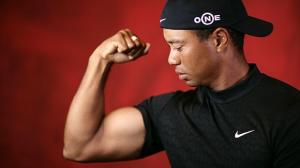 The world’s best golfer – and probably the greatest golfer of all time – Tiger Woods is reportedly in serious condition after his car struck a fire hydrant and a tree as he pulled out of the driveway of their Florida home.

If you are wondering whether he was drunk during the accident (we must admit that this is the first thing that came to mind), the police are saying that alcohol is not a factor. There were no signs of alcohol on the scene, according to celebrity gossip site TMZ.com

Update: Turns out that Woods’ injuries are not that serious; he was reportedly treated for some facial lacerations but was released and is now in good condition. 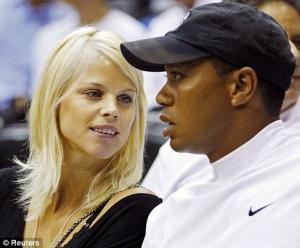 There is no justification for domestic violence whether it is committed by a man or by a woman. If the news report that Tiger Wood’s wife Elin Nordegren hit him in the face with a golf club is true, then she should be held to account for inflicting bodily harm on her husband.

According to a report by sports writer Furman Bisher, Tiger Woods had to undergo reconstructive surgery after his face was smashed by his wife.

The Daily Mail quotes the sports writer as saying:

‘At one point Tiger turned away to look at the TV, and as he turned back, Elin hit him on the right side of the face with the head of a 9-iron. When she struck Tiger, she put a huge gash in the right side of his face next to his nose (causing his nose to bruise some), and virtually knocking two of his upper teeth out, and breaking the bone on the upper right side.

Tiger ran scared as hell out of the house (which is why he had on no shoes) with Elin swinging the golf club throughout the hallway to the garage (i.e. causing the severe damage which has been reported). Tiger hoped in the Escalade and tried to leave; and as we know Elin knocked out the windows in the Escalade. When Tiger crashed, Elin panicked and was not sure what to tell the police (which is why there are two conflicting stories from her).’

‘If you remember FHP (Florida Highway Patrol) kept showing up at Isleworth to talk to Tiger, and was told by another FL attorney (who Tiger hired for PR reasons) Tiger was not ready to talk. Well now we know why, he was in Phoenix, and did not arrive back in Orlando until either late last Wednesday night or early Thursday morning. The surgeries were more intense than what they had originally planned, which meant Tiger was in PHX longer than he should have been.’

She must have done a good job whacking her husband’s face, eh? That’s terrible.