JFK Style Watch: Omega Watch and RayBan Sunglasses. What do you think of this Omega Watch advertisement featuring U.S. President John F. Kennedy. On the one hand we’re thinking, “Wow! What an advertising coup. The Omega people behind this deserve some props.” 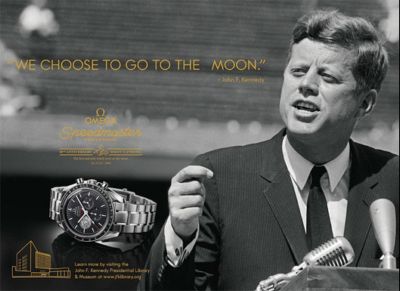 On the other hand we’re also thinking, “Damn! Is nothing sacred these days? Why the heck are they using the image of a dead president who may, if he’s alive, object to the use of his image. Those Omega people (and members of the Kennedy clan who approved of the ad) should be ashamed of themselves.”

Update: The New York Times has the details behind the JFK Omega advertisement:

Rachel Day, a spokeswoman for the nonprofit group that runs the John F. Kennedy Presidential Library and Museum and retains rights to many of Mr. Kennedy’s images, said the group had granted permission to use his likeness in the ads, but declined to discuss what, if anything, Omega paid.

So it is good to know that the use of JFK’s image was given permission by those tasked to give such permission. Now, how did the President end up with an Omega watch? Well, the NYT answers that question as well:

The watchmaker’s association with Mr. Kennedy began serendipitously. In 1960, a friend and political donor, Grant Stockdale, gave the then-senator an Omega Ultra Thin model, with the optimistic inscription “President of the United States John F. Kennedy from his friend Grant.” The watch could be seen in a photograph of Mr. Kennedy’s inauguration published in Life magazine. In 2005, Omega bought the watch for $350,000 at auction, and it is now in the Omega Museum in Biel, Switzerland.

Here’s JFK wearing his Omega watch during his inauguration. 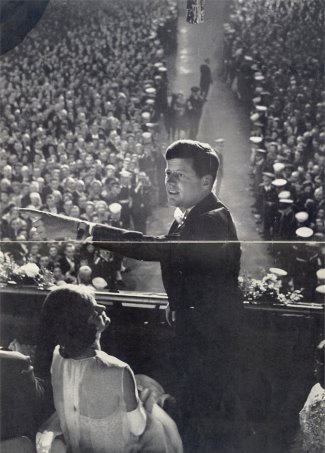 JFK Style Watch: Ray-Ban Sunglasses. Aww. Here’s a cute photo of JFK with his daughter Caroline. We’d like to think that they’re singing, “Fly me to the moon….” 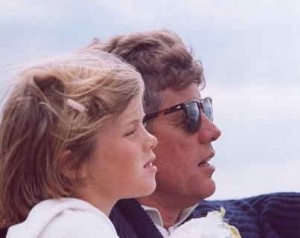 The President, for those of you who are wondering, is wearing a pair of Ray-Ban sunglassess. Specifically, our JFK is wearing a Ray-Ban Original Wayfarer 2140 Sunglasses. 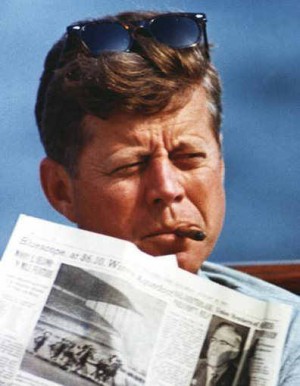 How cute and totally shaggable is this guy? Hehe. Go away, prurient thoughts, go away. We do not want to think of our Presidents like that. Hehe. 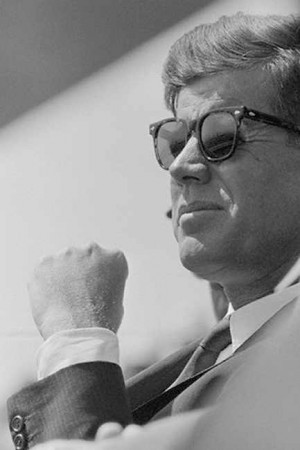