Nives Celsius Models for FHM Germany: Dino Drpic Wife (Update). Apparently, our favorite WAG Nives Celsius and her husband footballer Dino Drpic — who came to our attention after they were caught doing it in a football field — are no longer married. Awww.

They divorced in 2014 and have two kids together.

…..
Nives Celsius Song: Goal (18 June 2011). Apparently, our favorite WAG is also talented when it comes to vocal calisthenics so she is reportedly releasing a new single entitled, Goal. She is a singer too? Color us not surprised! She does seem to be the multi-talented type of a WAG.

Anyhoo, Nives’ new song is primarily about bumping uglies with football stars. The lyrics are kinda explicit which some of the conservative moralists might object to. Metro.uk reports that the song lyrics goes: “Goal, goal, goal, score me a goal. I’m naked, you are naked, score me a goal…. Be my Torres Fernando, keep filling me like Ronaldo and shake me my little Messi.”

Nives defends her choice of words by asserting that she’s “just telling the truth about footballers and the women who follow them.”

Well, who are we to question her wisdom on the subject of WAGs? After all, she’s living the fabulous WAG life while we only watch them from a distance.

…..
Nives Celsius Models for FHM Germany (4 April 2009). Remember Nives Celsius? You know, the wife of Croatian footballer Dino Drpic? Well, the girl had a photoshoot for an upcoming issue of FHM-Germany and we have some of those photos for you. Aren’t we cool?

Update: Oops, sorry, we had to delete the FHM photos. We’re pretty sure you can find them elsewhere. Again, our apologies. 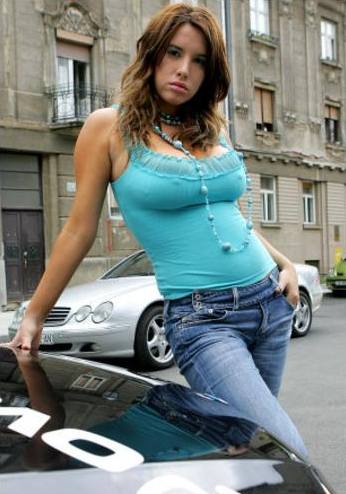 First they f*cked like minks in the middle of a football field:

The kinky couple kicked up a storm last month with their centre circle romp when Nives revealed they had even arranged for pals to leave the floodlights on at the Maksimir Stadium.

“Dino had arranged that people should turn on the stadium lights for us and he finally fulfilled his dream of having s** in the middle of a football pitch. It was very naughty,” said Nives in the interview which was done to promote her book ‘The Naked Truth’ on life as a glamour model.

And now they are planning to do it “on top of Real Madrid’s Bernabeu stadium.” That’s kind of crazy but, we gotta admit, it’s also kind of hot.