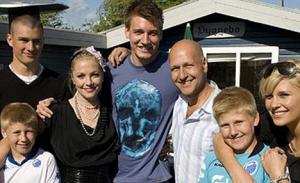 Nicklas’ girlfriend is Caroline Luel-Brockdorff who is some kind of a baroness. How is she a baroness? We don’t know. And we are too upset about Nicklas having a girl in his life to research about her blue blood. Anyhoo, that’s her and Nicklas and some kids (we’re assuming those are her kids) and some random bald guy.

Want to read more about our ex-imaginary boyfriend? Check out our post on Nicklas Bendtner’s underwear. Or maybe you’re more interested in ogling at more Danish hunks?

Nicklas Bendtners Girlfriend Update: Sadly, They Broke Up (04 July 2011). Sadly, our Nicklas and his Baroness broke up. Ordinarily, we’d be happy if our imaginary boyfriends break up with their real-life girlfriends but we are sad with this particular break-up? Why? Because they just had a kid together. And because they announced their engagement not very recently.

Why did Nicklas and Caroline broke up? Well, according to an unnamed source quoted by the Daily Mail, they apparently grew apart following the birth of their child. Weird, no? They drifted apart instead of growing closer together. But this thing actually happens.

Says the unnamed source about the break-up:

‘It was a whirlwind romance and they were madly in love – perhaps they did realise in the end they were poles apart in age and outlook. The birth of a child can put a strain on any relationship but there seems to have been more pressure on them both recently in the last couple of weeks.

‘They decided to go their separate ways now rather than have a messy divorce in the future. They will of course remain in close contact because of the child.’

Well, good luck to both. We hope Caroline will find another man if that’s what she wants. And we hope Nicklas will call us. Haha. It will happen in our dreams.

Nicklas Bendtners Girlfriend 2017 Update (posted: 15 November 2017). After he broke up with the Baroness, our Nicklas went on to date Julie Zangenberg. What can we say about Julie? Well, she is an actress in Denmark so she is famous in her own right. 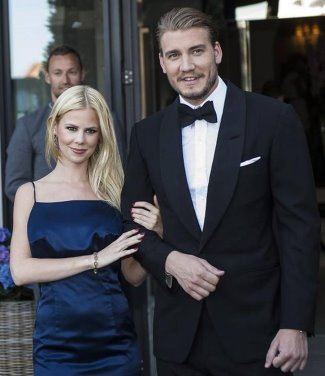