Says Natalia: “All through our relationship there were three people —Aston, Louisa and I. We had a blazing row which led to me dumping him. I got back with him after he promised he wouldn’t hide anything again. I could deal with Louisa being his ex but she was always there or ringing him up.”

She adds: “I repeatedly told him, ‘She is your weakness’. He hated me for that but he knew deep down I was right. He vowed to stay away from her for me, but a few weeks later I found out that he was still in contact with her. Aston also kept pictures of him and Louisa on his bedroom wall. I asked him to remove them as we were now together, but he went mad.”

According to Natalia, Aston wanted to present himself publicly as a single guy: “Aston told me JLS needed to be single in public as they needed girls to buy their CDs and when they meet them think they have a chance to be their lovers.”

On the Natalia Rush Aston Merrygold split: “I spent the first night with him at his new house. When I left he told me, ‘I love you. I’ll call you later’. But since then I haven’t heard a word from him. I tried calling and texting, but he has just shut me out. I later found out he’d gone out with Louisa. I feel so used. I supported him when he was a nobody and now he has tossed me out of his life. I don’t want to know him any more.”

What say you, Aston? You better do something right with this girl. You know what they say about a woman scorned.

Celebrity Muscles: The JLS Boyband (posted 01 March 2009). Mirror, mirror on the wall, who’s the hottest of them all? If you’re like, “Who are those guys?” then you might have been living under the rock or, and this is more likely, you are living outside Britain. Anyways, them three shirtless guys are members of the JLS (Jack the Lad Swing) British boyband. There’s supposed to be four of them but we can’t find the other one. Sorry, fourth dude! Want to see some JLS Underwear Photos. 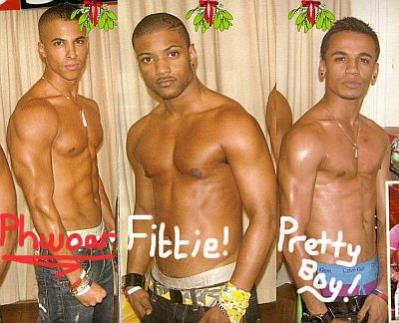