Military Hunks: Real Marines and Soldiers Turned Celebrities. When we first came across the above photo of David Mcintosh and found out that he’s a Royal Marine-turned-reality-TV-star we went, “Hmmm. Why don’t we have military hunks-turned-celebrities like him in America?” Turns out that we are actually wrong. Coz we do have real military hunks in the U.S. who are now in the celebrity world. 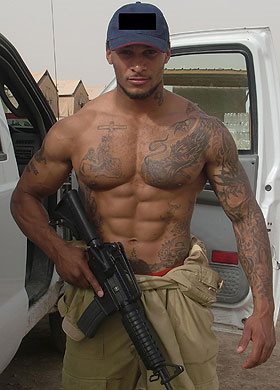 We are not talking about the celebrities in the military which we blogged about back in 2012 since those guys are from old Hollywood. Instead, we are talking about now, about soldiers and marines who recently appeared on the big screen or television.

Anyhoo, before we check out your American military hunks/celebrities, here’s a photo of David Mcintosh looking good in a long coat and what appears to be a form-fitting winter underwear. 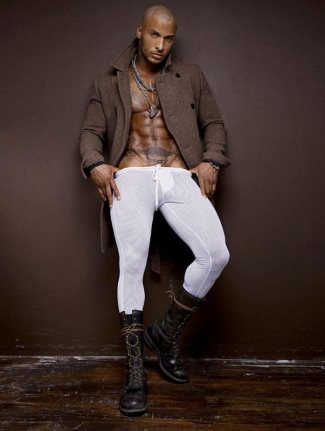 For those of you asking, David served as a Royal Marines commando in Afghanistan, Northern Ireland, Somalia, and the Gulf. He then joined the Gladiators TV series, a reality TV show where contestants battle against Gladiators in events that include dogfighting, catapulting, running the gauntlet, cannonball run, and many others. Sounds like fun, huh?

Here’s how a forum poster on truebloodaskarsfans.com say about our handsome military trio in Generation Kill or GK:

When you do get to watch GK, you can spot them pretty easily (once you get everyone sorted out, that is, there are a lot of characters to keep up with!). Rudy Reyes (the one who played himself and helped the actors learn everything) is buck naked in the first episode and has the most perfect body you’ve ever seen. Eric Kocher ended up playing someone other than himself (he’s the driver for another unit and has a few good lines and is also super cute and built like no tomorrow). Jeff Carisalez was another Marine who was originally supposed to be just a technical advisor and ended up acting in the series (during the commentary that AS and James Ransone do for episode four, they talk about how he would mercilessly rib the actors and crew).

Here’s a shirtless pic of Eric Kocher who, according to his IMDB profile, “received two Purple Hearts, a Bronze Star for valor and two Navy commendations in five tours of Iraq and Afghanistan”. 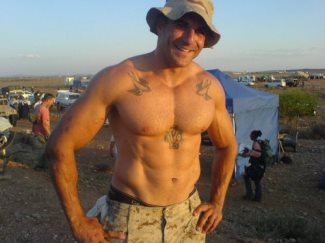 In 1998, the hot, hot, hot Rudy Reyes “joined the United States Marine Corps and was ultimately selected for (and passed) Marine Recon training. He served in Afghanistan and took part in the Iraq war. Reyes served on the USS Dubuque and often led platoon PT sessions on ship.” [Source: Wikipedia]

Rudy also appeared in a Reconnaissance Marines calendar. All we will say is, “Wowza”!!! 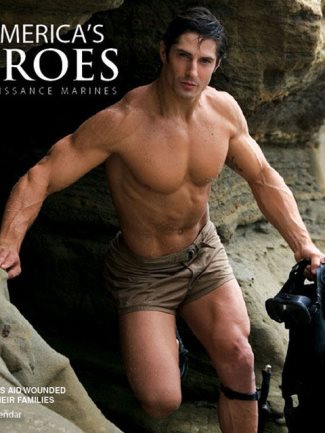 We can’t find a shirtless pic of Jeffrey John Carisalez but he’s got a more extensive acting career than his pals. According to IMDB, he starred in the 2010 Matt Damon movie, Green Zone, and is a semi-regular in the award-winning HBO drama, Treme.

Here’s another real hot marine, Andrew McLaren, “a former U.S. Marine Sergeant who served on the Fleet Anti-Terrorism Security Team and served in Iraq and Liberia”. He starred in the 2007 movie Battle for Haditha and was one of the coach/trainer in the NBC reality show Stars Earn Stripes.

That’s it for now fellow Famewatchers. Who of these real military hunks is your favorite?