Matt Cardle Hair Transplant. What do James Nesbitt, Louis Walsh, and X-Factor winner Matt Cardle have in common? Well, they all had hair issues who sought to address said issues by undergoing hair transplant procedures. Apparently, they also went to the same clinic, the Hair Restoration Blackrock or HRBR in Dublin, Ireland.

Matt Cardle Hair Transplant: Does He Really Need One? While watching the above video the thought going through our mind was, “He actually has good hair. He does not really need a hair transplant, does he? You know who needs a hair transplant? It’s the future king of the United Kingdom, Prince William. That dude should go to the HRBR clinic ASAP before he totally loses his hair and go baldie bald bald!”

That was what we were thinking. Initially, that is. We didn’t see the need for a guy like Matt, with a head that does not look like its going bald, to undergo a hair transplant procedure. But then he said something that made sense and saw his point.

Here’s what he said: “It’s a confidence thing at the end of the day. You feel confident with a full head of hair and if there’s an opportunity to maintain that and hold onto that for a little bit longer then I don’t see why not…There are thousands, probably millions of guys out there losing their hair. If it bothers you, there is something you can do about it. For a patient it’s straight forward, it’s painless and it’s totally worth doing. Before you know it your hair is transformed on your head and you can really see the difference.”

And so we decided to watch the video for a second time and we did notice that the upper part of his head is thinner than the rest. Of course, that’s an obvious sign that his hair is indeed thinning. So it does make sense for him to undergo the procedure.

We wanted to do a “before and after” hair transplant photos for Matt Cardle but we can’t find any “before” pic showing the hair of the X-Factor winner. The next best thing we can come up with is this “before and after he got sexy hot”: 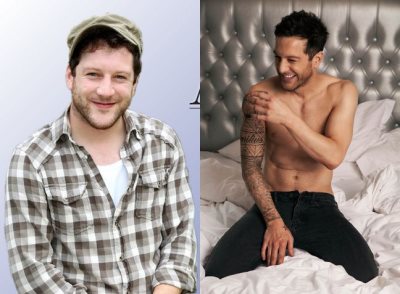 What a beautiful transformation, no? Who wouldn’t want to jump in bed with that shirtless dude and do the horizontal dance with him? All of us here at Famewatcher certainly do. Haha.