Male Celebrity G-string Underwear. Should we include Tom Cruise in our list of famous men who wore (or still wears) g-string underwear? His former agent or surrogate mom suggests that we should. Apparently, Tom used to walk around the house “in a little G-string strap and nothing else”. 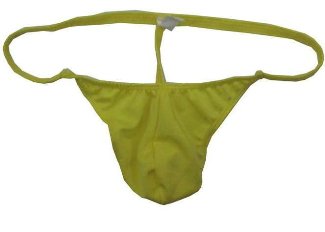 Now, ain’t it fun to imagine a young Tom Cruise walking around the living room in nothing but G-strings? However, to use the words of our grandma, “You gotta see it to believe it.” Or, in internet parlance, “Pics or it didn’t happen!” We’re not saying we don’t believe Tom’s ex-agent, Eileen Berlin. But we gotta see pics of Tom in his g-string to confirm that it happened. [For male celebrity g-string underwear with evidence, check out Channing Tatum’s Stripping Video.]

Anyhoo, here’s what Eileen said about Tom’s young days as a wannabe actor (via The Daily Mail):

By the time I met him, he had decided he could be a star. He wanted to be treated like a star and he acted like a star. He would walk around my house in a little G-string strap and nothing else. I had a mirrored wall and he would stand in front of it, flexing his biceps and admiring himself. I was a bit embarrassed but he liked to show off his body. He had a great pride in it.

We would be proud too if we have the young body and bulging biceps and the looks of a Tom Cruise. Hehe.

He was sweet, respectful and mannerly to a fault. He always addressed me as “ma’am” and my husband as “sir”. But he was so private, he couldn’t show his true feelings. You would get so far and he would close down. I am sure his wives would have come up against that barrier.

He would channel his rage into his roles. For Taps, he locked himself in the closet. He said he thought about someone raping his sister before he filmed a scene where he blasted a machine gun. Once, my husband and I took him out for lunch while they were on location and a waitress said, “Are you one of the actors?’’ Tom said to us, “Please tell her not to ask me any questions. I’m still in character.”

We love to mock Tom because he makes it easy for us to mock him. However, Eileen’s story about his young life makes him endearing and actually lovable. Young Tommie, young Tommie, where art thou? And where art thine photograph in G-strings?

Well, it’s unlikely that we’ll ever see any such photograph so let’s just settle for these construction workers, the manliest of men, who love them their G-strings. 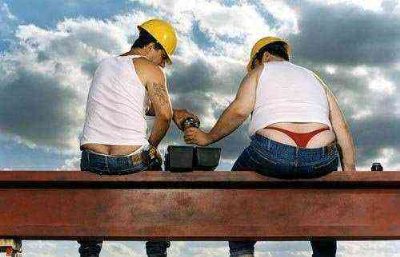 Do you know any male celebrity g-string underwear fan aside from Tom Cruise? Do tell in the comments.