But fortunately this time, it’s not as scandalous as Miss California getting a boob job. 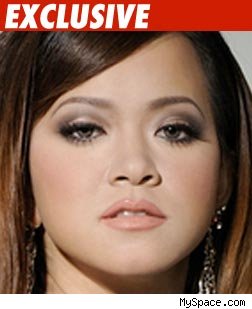 TMZ reports: “According to a lawsuit filed earlier this week in Orange County, Yen Le — who was crowned Miss Vietnam USA in November 2007 — is suing the pageant organizers because she alleges she was supposed to receive $10,000 and a new Mercedes for winning. She’s suing for over $50K in damages, plus interest, attorneys’ fees and court costs.”

Want more photos of the Vietnamese beauty titlist? Here’s one where she is trying to give Latina superstar Jennifer Lopez a run for her money. Nice work, Yen Le!

Here’s Yen Len when she was crowned Miss Vietnam-USA. 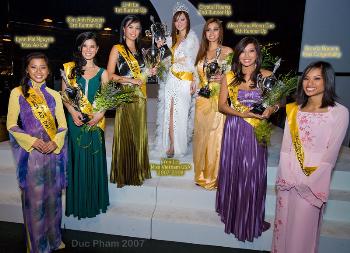 UPDATE: Of course, there’s two sides to a story. According to a news report by the OC Register, the organizer of the Miss Vietnam-USA beauty title is denying the allegations being made by Yen Le.

From the Orange County Register: “Miss Vietnam USA creator Thomas Quoc Thai Nguyen denied allegations Wednesday made by former winner Yen Le that he failed to pay her prize money and stopped making payments on the vehicle she won

The report adds: “Nguyen said Wednesday that he was unaware of the lawsuit and had not been served paperwork. He denied any wrongdoing and claimed Le waived the cash prize by asking for an upgrade on the Mercedes.”

The OC Register quotes Nguyen as saying: “The $10,000 was included in the Mercedes because she wanted an upgrade. She’s still driving the car, and now she just wants more money.”

Who do you believe between these two?

We admit we do not know who is telling the truth. But that’s why the court system is there to get to the truth.