Lily of the Mohawks is Now St. Kateri Tekakwitha (2020 Update). We decided to update this post, which we originally published eleven years ago in August 2009, to note that Kateri Tekakwitha is now a saint. Actually, she’s been a saint since 2012 but we’re nearly a decade late in doing this update.

Britannica has some details: “In December 2011, after evaluating the testimony of a young boy who claimed that his infection with flesh-eating bacteria disappeared after he prayed for her intercession, Pope Benedict XVI recognized Tekakwitha as a saint. She was canonized the following October.”

According to catholic.org, St. Kateri is the “patroness of ecology and the environment, people in exile, and Native Americans.” 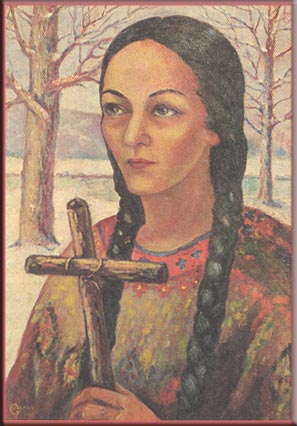 And here’s a Time Magazine article from way back in 1961 about the Lily of the Mohawks:

The dark-skinned, pock-marked girl who may well become the first native-born American saint* last week made another step on the long road to canonization. In a public consistory in Rome, Pope John XXIII heard church lawyers make a petition for the beatification of Kateri Tekakwitha.

Fasting on Sunday. She was born 304 years ago in the Iroquoist village of Ossernenon, now Auriesville, N.Y. Her father, Kenheronkwa, was a Mohawk chief, her mother, Kahenta, an Algonquin whom the Mohawks had taken captive. Smallpox killed both her parents and left four-year-old Tekakwitha (“One who puts things in order”) badly scarred and weakened for life.

Her uncle, Onsegongo, who brought her up, was chagrined when at the age of eight she refused to be betrothed to the young Indian he had picked out for her. He was outraged when, at the age of 20, she was baptized by Jesuit Missionary Father Jacques de Lamberville, who gave her the Christian name Catherine—in Indian, Kateri. Her Mohawk family and their friends gave the young Christian a hard time. Her refusal to work on Sunday made it a fast day—”If you won’t work, you won’t eat,” said her aunts. Uncle Onsegongo encouraged drunken braves to molest her; children called her names and threw stones at her. Father de Lamberville contrived to spirit her away from the village to a missionary settlement in Canada.

Under a Blanket of Blue. The result was a chase along the Iroquois trail to Lake Champlain—Onsegongo in swift-moccasined pursuit with three bullets in his musket. Kateri eluded him, however, and spent the rest of her short life among the Christian Indians of Caughnawaga, near Laprairie in Canada.

Here, on the Feast of the Annunciation in 1679, “the Lily of the Mohawks” consecrated her virginity to God and, in tribute to the Virgin Mary, whose color is blue, she changed her customary scarlet blanket for a blue one. Until the missionaries stopped her, Kateri went to Indian extremes of asceticism—lashing and branding herself, walking barefoot in the snow, putting hot embers between her toes and sleeping in brambles. She was soon venerated by her fellow Christian Indians as a living saint, and when she died at 24, they tore up her clothes for relics. Ever since, a mounting list of cures and wonders has been attributed by both Indian and white Catholics to her intercession. Said Pope Pius XI: “Her life itself is a miracle.”