Brooks and Dunn: Why They Split Up … Reunited! (2020 Update). We are republishing this post eleven years later simply to note that the duo are together again. Yay! They reunited in 2015 and were inducted last year to the Country Music Hall of Fame.

They were supposed to go on tour this year but, as with other big events that involves the gathering of people, it was disrupted by Miss Rona. They rescheduled the tour to 2021 so let’s keep our fingers crossed that things will be better by then. 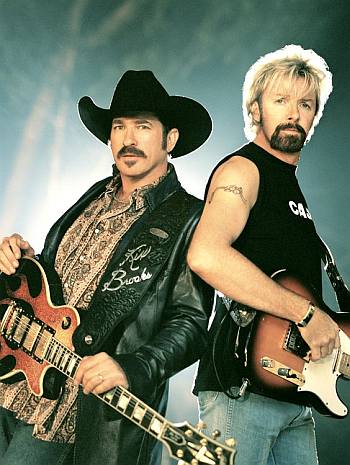 Want more hot male singers?
…..
Brooks and Dunn: Why They Split Up and Their Last Tour – Interview (14 August 2009). In this interview with CMT, Brooks and Dunn, one of the most successful country music duo, talk about their last tour together and explain why – after 20 years – they decided to break up and go their separate ways.

So … did anything new happen this week?
DUNN: Not a thing, man. Same old, same old. … Every day’s groundhog day.
BROOKS: Not much for me.

We just heard about some things happening with you guys in 2010 — some exciting things like the Last Rodeo tour, your last tour together.
BROOKS: We came to this decision that maybe it’s a good time to hang up the spurs, but before we do it, we’re gonna go ride the trail one more time. I’ve said this before, but we really feel that the one thing we’ll always have in common is how much we appreciate our fans and what they’ve meant to us over the years. So we’re really looking forward [to the tour].

We, I’m proud to say, have never had a fight — a fistfight or a screaming fight, either one. We just felt like it was time to call it a day on this one. And we’re going to go back and go see everybody one more time. We hope they want to come see us — because we hate it when nobody shows up. (laughs)

DUNN: Back up a little bit to that fistfight comment. He hit me right between the eyes with a cue ball.
BROOKS: There was the one time with the cue ball, but it was just a bad shot, really.
DUNN: I’ve still got the pump knot right here between my eyes. I’m seeing double. We’re through. We’re done. Let’s go! (laughs)

What about the differences between being a successful duo and having a successful marriage. Both of you have successful marriages. What are the similarities there?
BROOKS: (laughs) I’ve got some stuff that keeps my marriage together that I don’t have in common with Ronnie Dunn! I mean, music’s good and everything, but it ain’t enough to keep us running for another 20 years, OK?
DUNN: I’m with you, hoss. Ditto on that … hoss.

The new album, #1’s and Then Some, is going to be out this fall. Is there one song that defined your career?

BROOKS: I don’t know. … As Ronnie calls it, we’ve had different waves to surf along the way. ‘Boot Scoot,’ obviously, at the beginning of our career. But it was funny because I remember Bill Anderson was doing a radio show at Opryland when we first got started. “Brand New Man” had really taken off. He said, “Boys, do you know what it means to have your career song as your very first single?” We looked at each other. “It’s over?! Dang, Bill!” He just put a period on our career with our first dang song. (laughs)

There have been songs along the way — “My Maria” was another one, “Only in America.” Different songs have, I think, structured different parts of our career. And it’s been fun that we’ve had more than one.

DUNN: Part of the challenge is reinventing yourself along the way. That’s it.

A bit of a reinvention going on with the new single, “Honky Tonk Stomp.” You’ve got Billy Gibbons of ZZ Top involved with that. Tell me about the collaboration.
DUNN: We were out on the road touring with them the year before last … throwing stuff back and forth — ideas. This is not one of the songs we worked on, but it just sounded like the perfect spot for him after we tracked it and cut it. I called him up and said, “Man, would you play guitar on this?” He said, “I’m all about it.”

I got an e-mail yesterday from Joe Hardy, ZZ’s producer forever. He goes, “I just got a call from Gibbons. Gibbons is listening to country radio. We don’t know what you’ve done to him.” He’s listening for the song obviously. Pretty cool.