Kate Winslet Style Watch: Strapless Yves St. Laurent Dress. Academy Award winner Kate Winslet in her silver strapless Yves St Laurent dress. What is Kate up to these days? We guess she’s preparing for her two movies currently in pre-production: Which Brings Me to You with the hunky Bradley Cooper and Contagion, an action thriller where she’ll co-star with Matt Damon, Jude Law, and Marion Cotillard among others. 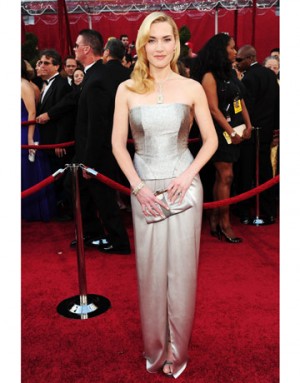 Oscar winner Kate Winslet poses for a Harper’s Magazine photoshoot. Looks dangerous to us but she’s not really climbing a building is she? Otherwise, watch out Angelina you’re not the only celebrity with building climbing skills.

Kate Winslet on Playboy? The Hef Wants Her
23 February 2009

Weeks after she declared to the world that she’s not gonna take any nude movie roles no more, Oscar winner Kate Winslet gets offered a photoshoot she just might not be able to refuse to: posing for Hugh Hefner’s playboy.

Says The Hef: “There’s no question we would be interested in Kate. It’s a competitive market, more than it used to be, so she would be a most welcome addition in our pages.”

So what say you Kate Winslet? We know you’re a “serious” actress now but don’t you think you owe it to your male fans to see you one last time. Accept Hef’s offer, baby.