Let’s have three cheers for tennis great Martina Navratilova and girlfriend Julia Lemigova. The two got engaged at the U.S. Open. Martina proposed, Julia accepted, all is right with the world. Here’s a picture of the proposal which was broadcast on the jumbotron at the Arthur Ashe Stadium: 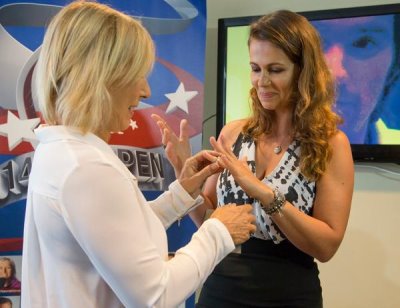 Julia Lemigova Martina Navratilova Engagement. People Magazine has some details on how the engagement went:

Tennis legend Martina Navratilova, 57, got engaged to girlfriend Julia Lemigova, 42, in a moment that was telecast on the Jumbotron during the day’s play at New York’s Arthur Ashe stadium.

Navratilova popped the question during a break while she was providing color commentary for the men’s matches.

The tennis legend was being interviewed by Ken Solomon in the Tennis Channel suite when she turned to Lemigova and said she would be asking the questions this time. Navratilova got down on one knee and offered her girlfriend a diamond-studded ring.

Yay! Says Martina of the proposal:

Gay marriage has really gone mainstream, no? Can you imagine this happening ten years ago? Yay! But before you get carried away, remember that there are more battles to fight before gay marriage advocates will win the war. In fact, Martina lives in Florida where gay marriage is not legal. Not yet anyway. We think its’ just a matter of time though because Florida courts have consistently declared the state’s ban on same-sex marriage to be unconstitutional.

Martina and Julia were first spotted dating in public back in 2009. More from a 2009 news report by express.co.uk:

The two women were pictured in public together for the first time while on holiday in St Tropez.

It is believed Lemigova is the mystery “drop dead beautiful” girlfriend Navratilova spoke of when she appeared on ITV1’s I’m A Celebrity… Get Me Out Of Here! last year.

Dressed casually in shorts and T-shirts, the pair were spotted taking in the sights of the French Riviera where they went shopping before enjoying a boat trip together.

By the way, it might interest you to know that Martina is marrying a beauty queen. She was runner-up in the 1991 Miss Universe contest when she represented the USSR (for young Famewatchers, USSR stands for the Union of Soviet Socialist Republics). Julia is, apparently, the last beauty queen of the USSR before it broke up into separate countries. Here’s a pic of Martina’s future wife tweeted by the Miss Universe organization: 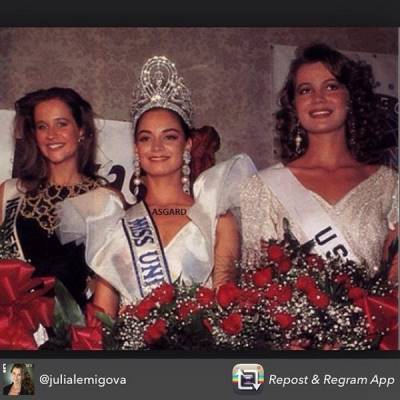 A beauty queen and a tennis champion, that’s a match made in heaven! We look forward to covering these lovebirds’ upcoming wedding.

Before we end this post, here are some four things you might want to know about Julia Lemigova:

That’s it for now, Famewatchers. Check back later when we cover the Martina Navratilova and Julia Lemigova wedding.