How good of a quarterback is Andrew Luck? He’s really, really good! In fact, football website cover32.com has him at #5 in the website’s Top Ten Best Quarterbacks Today list. Here’s what folks at Cover32 are saying about the Indianapolis Colts QB:

Back-to-back 11-5 seasons in Indianapolis show just how good this young quarterback is at leading a team. Throw in all of the adversity that the Colts have faced during that time (the departure of Peyton Manning, Chuck Pagano’s illness, Reggie Wayne’s torn ACL, etc.) and Luck’s early career is even more impressive. Ask any general manager who they would take right now to be their quarterback for the next five years and they’ll say Luck; if they don’t, they should be fired.

Andrew Luck Girlfriend. What’s Andrew’s relationship status? Is he dating anyone? Does he have a girlfriend? Yup! He’s dating college sweetheart Nicole Pachanec. What a beautiful girl, no? 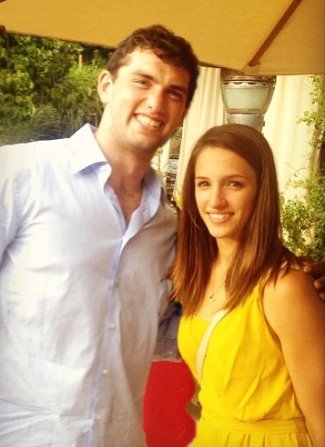 Nicole is a gymnast according to slimcelebrity.com which lists the following info tidbits about Andrew’s girlfriend:

Andrew Luck Shirtless Photos. Looking for shirtless photos of the Indianapolis Colts quarterback? Here’s one tweeted by teammate punter Pat McAfee who didn’t realize that Andrew is changing clothes in the background. 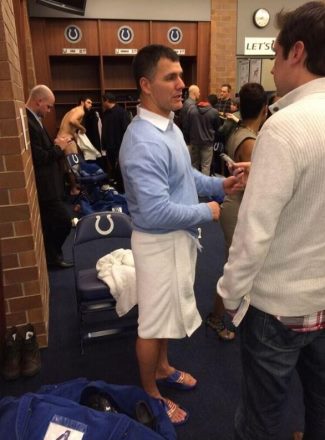