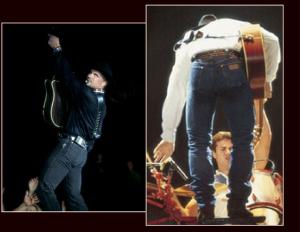 Like Garth Brooks, for example. Darn, doesn’t he look hawt in these photos. Okay, we’re not a fan of that striped shirt (ugh!) but we’re talking about pants here so lets focus on his sexy jeans …. which should go down til the sun comes up. 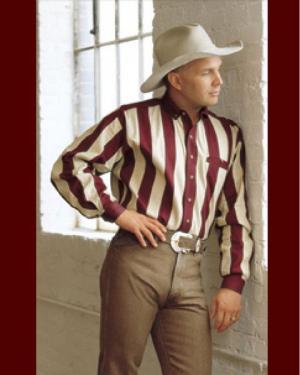 By the way, if you are a Garth Brooks fan (which we are), it might interest you to know that he is going to be inducted in the Oklahoma State University (OSU) Hall of Fame.

From the OSU press release:
Garth Brooks, of Yukon, Okla., graduated from OSU in 1984 and is now certified by the Recording Industry Association of America as the number 1 selling solo artist in U.S. history. Brooks has sold in excess of 128 million albums and has received every accolade the recording industry can bestow on an artist. His body of work – including the groundbreaking No Fences, Ropin’ The Wind, The Hits and Double Live – propelled country music as a genre to the front pages of newspapers and magazine covers worldwide.

Brooks is currently in retirement, but when called upon by events greater than his own self-interest he returns to the stage. The latest of these was when the President himself requested that he be a part of President Obama’s Inaugural Celebration at the Lincoln Memorial. He performed as a crowd of more than 300,000 attended the historic event and did the “wave” to Garth’s performance of “Shout” while the President sang along. Brooks also performed for President Obama’s first late-night TV appearance on The Tonight Show with Jay Leno.

When the Governor of California asked for Garth’s help he responded by performing five concerts in two days, selling out all five shows (83,000 tickets) in less than an hour and generating more than $6 million for victims and firefighters of California Wildfires in a single weekend. Portions of the live concerts were shown as a TV special titled, “Garth Brooks: Live in L.A.” where viewers donated to the organization Fire Intervention Relief Effort (FIRE).

Congratulations, Garth Brooks. You so deserve the award.